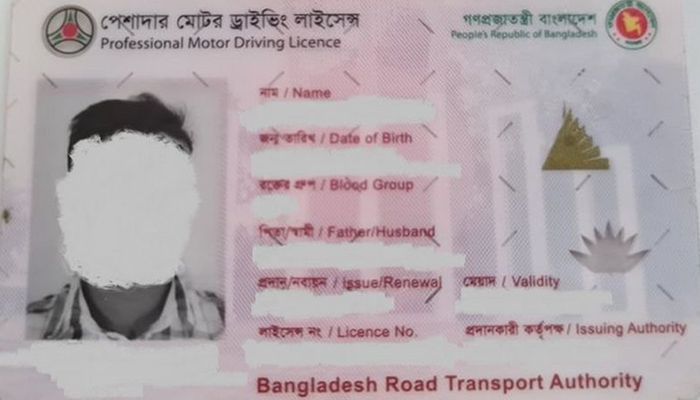 The Bangladesh Road Transport Authority (BRTA) is starting issuing new driving licenses from Monday (October 11) after being closed for more than two years.

However, even if the work starts from today, a driver will have to wait a few more days to get a license, officials said.

BRTA director and spokesman Sheikh Mohammad Mahbub-e-Rabbani told the media that work on printing the license had already begun.

About 12 lakh drivers are waiting to get licenses from BRTA. The agency says their licenses could not be issued due to technical complications. The BRTA had been issuing temporary licenses to these drivers.

Regarding how the drivers will get the license, the BRTA director said that if the license is printed, the applicant driver will be informed about the date of collection through SMS or mobile message. At the same time the printed license card will be packaged and sent to the concerned district circle office through courier service.

Mahbub-e-Rabbani said it would take three to four days for these to be ready and delivered to the service delivery outlets in different districts and handed over to the applicants. However, all pending licenses can be issued within the next six months.

Due to technical complications, driver's licenses - a kind of digitized smart card - have been suspended for more than two years. Of these, 12 lakh 45 thousand drivers have applied for licenses, who have passed the written, oral and practical exams.

According to BRTA, all these applications are old applications. The highest number, five lakh, was applied for six months ago. Earlier, the government had signed agreements with two other companies to print smart driving licenses in two phases, but they failed to complete the work within the stipulated time.

Most recently, at the end of August this year, BRTA signed a new agreement with Bangladesh Machine Tools Factory BMTF, a subsidiary of the Army. Then the work of printing smart driving license card started. BMTF's factory is printing more than nine thousand licenses a day.

However, for those who are applying for a new driving license, it does not take extra time, the BRTA said. The smart card is being provided on time with biometric on their scheduled date.