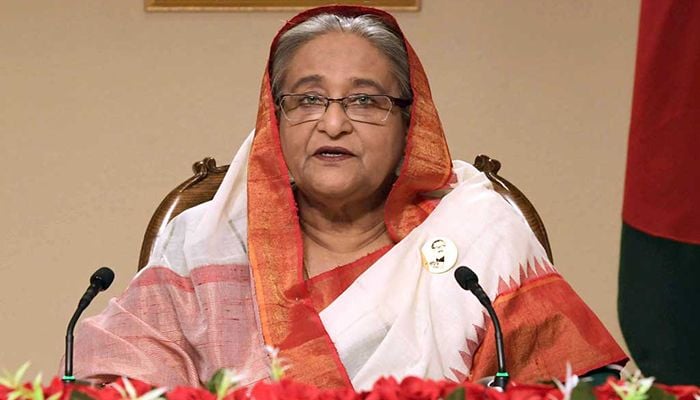 ﻿Prime Minister Sheikh Hasina today vowed to continue the country's development spree despite the risks, urging everyone to exercise caution and keep disasters in mind.

"We are always under the impression that the country is ours. So, whatever dangers may arise, the development spree will undoubtedly continue. —- We will undoubtedly take steps forward in the direction of progress in the face of all obstacles. We've been working hard to achieve our aim "she stated.

The prime minister made the remarks via video conferencing from her official Ganabhaban house here, where she was speaking at a gathering commemorating the 50th anniversary of the Cyclone Preparedness Programme (CPP) and the International Day for Disaster Risk Reduction (IDDRR).

She believed that these units will aid CPP in speeding up disaster relief efforts.

Bangladesh is becoming an excellent country to combat global calamities, according to the prime minister, thanks to the government's tireless efforts to follow in the footsteps of Bangabandhu Sheikh Mujibur Rahman, the Father of the Nation.

She urged everyone involved to work together to maintain Bangladesh's global standing as a disaster-resilient nation.

Dr. Md. Enamur Rahman, State Minister for the Ministry of Disaster Management and Relief, and his Secretary, Md. Mohsin, addressed at the event from the capital's Osmani Memorial Auditorium.

The session was chaired by Prime Minister's Principal Secretary Dr Ahmad Kaikaus from the Ganabhaban, while local public representatives including parliamentarians, government officials, and others were linked from the Muktijoddha Math, Cox's Bazar end.

For their remarkable contribution to the field of disaster risk management, the state minister for the Ministry of Disaster Management and Relief presented three best organizers and six volunteers, including three women, with "lifetime honorary medals" on behalf of the premier.

Bangladesh is commemorating the International Day for Disaster Risk Reduction with the local subject "Work together for catastrophe risk reduction," which corresponds to the global theme for the 2021 edition, "International collaboration for developing nations to decrease disaster risk and losses."

Later, at the Cox's Bazar end, the premier observed a cultural presentation that included a small skit on disaster preparedness.

A film documentary about the CPP's 50th anniversary, from Bangabandhu to Sheikh Hasina, was also shown during the event.