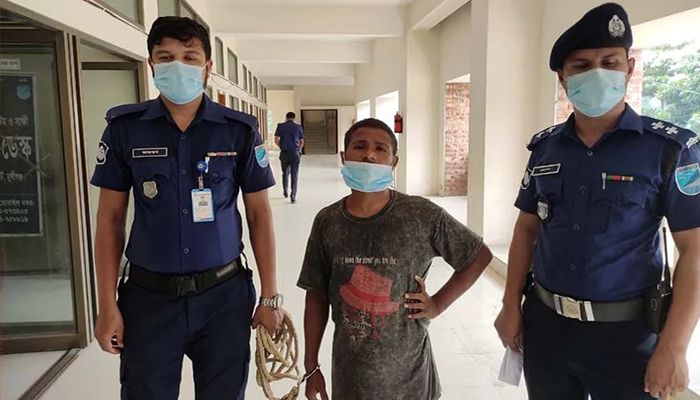 ﻿A court has granted a six-day remand to Upendra Bihar, 45, an Indian national arrested from the Padma Bridge project area in Munshiganj. Judge Arafatul Rakib of the district's Senior Judicial Magistrate's Court granted the remand at around 12:30 pm on Thursday. Earlier, he was arrested from Padma Bridge area on Tuesday afternoon. Later a case was filed against him at Louhjong police station.

Munshiganj court police inspector. Jamal Uddin said that in the case filed at Louhjong police station, Upendra Bihar was produced in court on Wednesday afternoon and the investigation officer of the case applied for a 10-day remand. The court judge set Thursday for the hearing of the remand application. Following the hearing this afternoon, Judge Arafatul Rakib granted a six-day remand.

According to the Louhjong police, members of the 99 Composite Brigade of the Army in charge of security of the Padma Bridge arrested a man on Tuesday afternoon for wandering around suspiciously. The detainee said his name was Upendra Bihar and his home was India.

Munshiganj Additional Superintendent of Police (Crime and Administration) Sumon Deb said members of the army in charge of security at the Padma Bridge arrested an Indian national and handed him over to the Louhjong police. Later, a case was filed against him at Louhjong police station under the Unauthorized Entry Act. When a 10-day remand was sought in the court for questioning in the case, the court granted a 6-day remand.