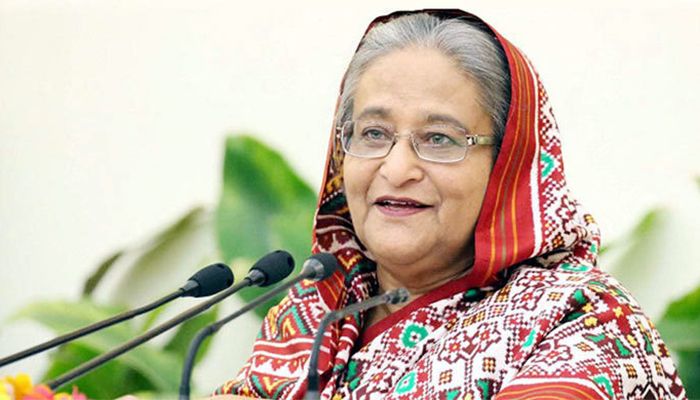 ﻿Prime Minister Sheikh Hasina has said although Bangladesh is affected by the adverse impacts of climate change, it can act as a role model before the world in addressing climate change.

“Bangladesh is especially affected by negative effects of climate change and can function as a role model to the developed and developing world,” she wrote in an article published in Washington based famous Diplomat magazine on Monday, reports BSS.

Following is the full article by Prime Minister Sheikh Hasina:

Climate Change through the Lens of Bangladesh

As Bangladesh is located at the end of the drainage basin of mighty Ganges-Brahmaputra-Meghna River systems, it is prone to climate-related disasters. The recent report of the Intergovernmental Panel on Climate Change painted an irreversible and irrefutable future, specifically for South and Southeast Asia. An increasing monsoon will lead to variability in local levels of rainfall and to frequent and intermittent flooding events. As a result, the coastal zone of Bangladesh will be highly susceptible to inundation and salinity, which will most likely hamper agricultural production and affect food security. Natural disasters linked to climate change are threatening the lives of the people and of future generations of the country.

This impending doom drives us to enhance the resilience of infrastructures, institutional capacity, and financial preparedness, and to help vulnerable communities to adapt and manage residual risks. There are several experiences and best practices that Bangladesh can share with developed and developing countries.

As chair of the Climate Vulnerable Forum (CVF) – a coalition of 48 countries from Asia, Africa, the Caribbean, the Pacific, and South America – Bangladesh has pioneered in the preparation of the comprehensive Mujib Climate Prosperity Plan. Launched in July this year, it is the first plan of a CVF country with a strategic investment framework to mobilize financing through international cooperation to implement climate-resilience initiatives. Germany as a resource-rich country may play an important role in this regard.

Key initiatives of the program include renewable energy, energy-storage infrastructure, power-grid modernization, and emission trading. The instrument also extends its spotlights to future-proof Bangladesh’s industries, locally led adaptation outcomes, and the financial protection of micro, small, and medium enterprises. In addition, the development of climate-resilient and nature-based agriculture and fisheries, environment-friendly transport, and climate-resilient well-being programs are pivotal to this visionary document.

With the global transition toward the Sustainable Development Goals, my government has initiated an overall plan for Bangladesh to become a developed country by 2041. As a result, the country’s economic growth trajectory has maintained smooth momentum even amid the prevailing COVID-19 crisis and despite a rising population, limited land resources and frequent natural disasters.

Simultaneously, we have been boosting the country’s agricultural production during the previous 20 years. Our annual rice production has almost tripled between 1971 and 2020. To date, more than 100 high-yielding, modern rice varieties have been developed and distributed to the farmers, including less water-intensive and more heat-tolerant varieties. In addition, floating agriculture is practiced in many areas of Bangladesh to meet the food demand, mitigating societal challenges and ensuring the conservation of biodiversity and the ecosystem.

Bangladesh has also built sea dykes, cyclone shelters, and coastal plantations as a green adaptation against cyclonic disasters. Riverbank erosion predictions are provided to ensure the prompt evacuation and to protect millions of lives and properties. The regulatory framework to empower and mobilize local governments and volunteers immediately during a disaster is an effective measure for preparedness.

Finally, my government has given utmost importance to greenbelt development and afforestation, and it has planted over 11.5 million saplings. The coastal zone of Bangladesh is home to the Sundarbans, one of the largest mangrove forests in the world. It has a high capacity to store carbon – up to five times more effectively than terrestrial forests.

As part of the Paris Climate Agreement, Bangladesh is pursuing a sustainable development pathway through limiting global warming. However, achieving these transformations at the pace and scale required will not be possible without the alignment and collaboration of all nations. Thus, Bangladesh calls for collaborative and coordinated actions to develop a global consortium that includes developed and developing countries. Yet, commitments and efforts are needed most from developed countries, such as Germany, as climate change is mainly caused and exacerbated by them. They should assist climate-vulnerable countries through innovative technology transfer, capacity building, and enhanced provision for accessing climate finance for adaptation and mitigation. Global communities can take the lead through absolute emission-reduction targets, by developing a shared vision and by exploiting lessons from successful initiatives to scale up for disaster-risk reduction and climate change adaptation.

Simultaneously, developing nations also need to act responsibly so that the change does not worsen. Bangladesh has been a positive example for such responsible behavior over the decades.