Saudi Arabia to Set Up SEZ 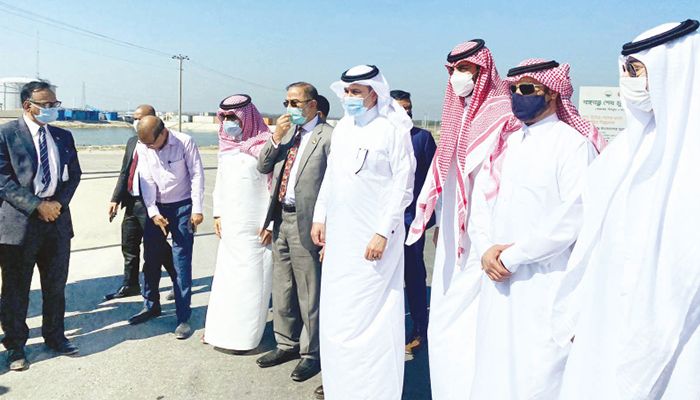 Saudi Arabia is interested in making big investments in Bangladesh and has taken initiatives to establish a special economic zone here, reports media.

He also visited the site proposed for the Saudi special economic zone and expressed satisfaction.

Besides, he expressed interest in expanding Saudi investment in Bangladesh to be a part of the country’s progress and BEZA’s development activities.

He said he would urge the Saudi government to be a part of this progress.

Saudi Arabia also has investment plans to build rail lines from Dhaka to the Payra port and develop Cox’s Bazar as an international tourist attraction.

The visiting Saudi minister is expected to discuss the matter with Bangladesh officials.

Saleh bin Nasser Al-Jasser came to Bangladesh to attend the inauguration of the International Investment Summit 2021 as a special guest.

During Prime Minister Sheikh Hasina’s visit to Jeddah in June 2016, a memorandum of understanding (MoU) on Saudi investment was signed.

Saudi Arabia proposed establishing the special economic zone in 2017 as part of the MoU.

The proposal to set up the zone on around 1,000 acres of land was made to BEZA.

Saudi investors will be able to invest in various sectors, including fuel and liquefied natural gas (LNG).

The project did not progress in the last two years due to the Covid-19 pandemic. Saudi Arabia will now propose appointing a developer.

He said establishing the Saudi economic zone would open new doors for investment in Bangladesh. “For this investment, the government will prioritise all kinds of Saudi proposals.”

An MoU on investing in Bangladesh based on a public-private partnership (PPP) was signed between the two countries in Riyadh on October 28 this year.

According to the MoU, Saudi investment in Bangladesh will increase in various sectors, including infrastructure, fuel, medical, and tourism.

Besides, Bangladesh will provide priority assistance for Saudi companies interested in investing here.

Earlier on September 19, a 22-member delegation led by Salman F Rahman met Khalid al-Falih and agreed to sign an MoU on increasing investment in Bangladesh through PPP.

During the meeting, Salman called on Saudi investors to invest in constructing a special economic zone and rail lines from Dhaka to the Payra port.

BEZA is building Bangabandhu Sheikh Mujib Shilpa Nagar on about 30,000 acres of land in Mirsharai and Sitakunda of Chattogram, and Sonagazi of Feni.

It has marked about 1,000 acres of land there responding to the Saudi economic zone investment proposal.

Several economic zones are being set up at Bangabandhu Sheikh Mujib Shilpa Nagar with the aim of establishing 100 such zones by 2030.

Power plants, connecting roads, land development and defence dams, bridges, and gas connections have been set up there.

Besides, seaports, central waste management and water treatment plants, residential and commercial areas, universities, and hospitals will be set up as BEZA is working to ensure all kinds of world-class facilities there.

Bangabandhu Sheikh Mujib Shilpa Nagar is being constructed under the World Bank’s Pride project at a cost of about Tk 4,500 crore.

A feasibility study is being carried out in collaboration with Japan and the World Bank to set up a separate seaport at Bangabandhu Sheikh Mujib Shilpa Nagar, which is located near the Chattogram port.