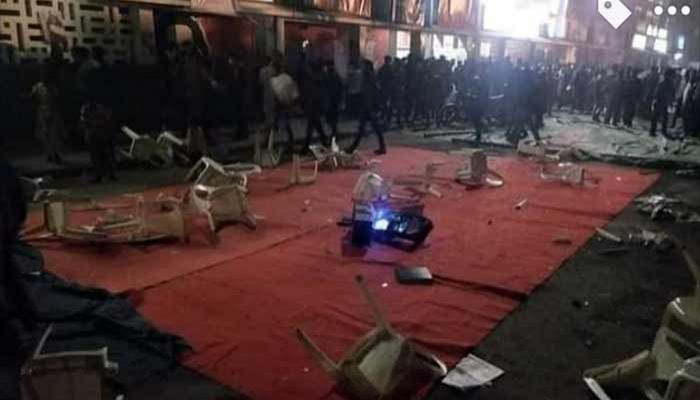 ﻿﻿Leaders and activists of the Bangladesh Chhatra League vandalized the stage and beat up the spectators by attacking the Qawwali concert held at the Student-Teacher Center (TSC) of Dhaka University.

The incident took place on Wednesday (January 12) evening. The organizers have alleged that the leaders and activists of Dhaka University and Dhaka College branch of Bangladesh Chhatra League carried out the attack with local weapons. Several people were reported injured.

According to the organizers, the attack was carried out by leaders and activists led by Saddam Hussein, the general secretary of Dhaka University BSL. Several people were injured.

They said last week they took permission from TSC director Akbar Hossain. Then they started their activities. Although the stage activities were completed during the day, the sound system was supposed to start working in the afternoon. But Tayyab, who is in charge of the sound system, said Saddam Hussein had forbidden him. Later they rented sound systems from other places.

Huzaifa, one of the organizers, said that before we started work today, TSC director Akbar had told them that Saddam had banned the program over the phone. He told us to talk to Saddam. Saddam later pressured the university proctor not to hold the program. Even then we try to do the program. Saddam Hussein was unable to cancel the program and led attack with his activists. "

Regarding the allegations, Saddam Hussein, general secretary of the Dhaka University BSL, said: "There is no question that the BSL was involved in the attack. As far as I know, the attack was due to an internal quarrel of the organizers. The two sides were at loggerheads over whether it was against Sharia law or whether women could stay.

University Proctor Professor Dr AKM Golam Rabbani said, "I don't know who carried out the attack. Action will be taken to identify the attackers.