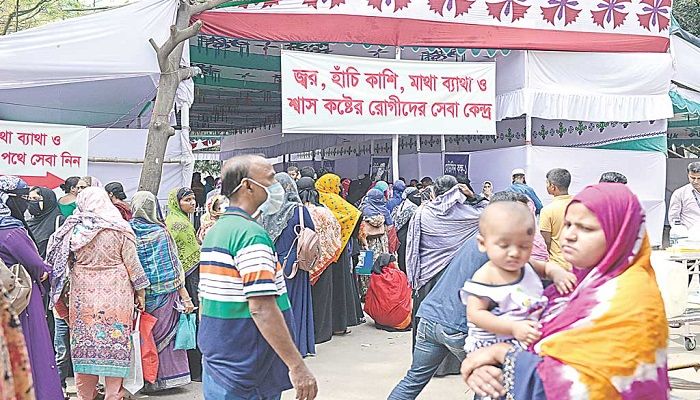 ﻿The capital Dhaka appears as COVID-19 epicenter as the fresh wave of the pandemic hit the country with health officials reporting 11.68 percent infection rate overnight, while the figure was 8.9 percent yesterday.

“This is for the first time after the elapse of the (pandemic’s) second wave, when the infection rate exceeded 10 percent,” a spokesman of the directorate general of health services (DGHS) said, reports BSS.

He said Dhaka was exposed to the worst wrath of the coronavirus onslaught as more than 80 percent of the cases were detected in the capital city.

“We are visibly going to be exposed to a fresh wave since the infection rate exceeded 10 percent,” health minister Zahid Maleque said on the sidelines of a programme.

Maleque’s comments came a day after government announced an 11-point restriction for indefinite period to halt the spread of Omicron variant of the virus.

The DGHS statistics showed that the wave, what it appeared to be the third wave, hit the capital first while the second wave began from south and northwestern areas.

The fresh wave, however, is reported from across the globe following the emergence of the Omicron variant of the virus from South Africa on November 25, 2021 and was first detected in Bangladesh on December 11.

The DGHS in a statement today reported 2,916 COVID-19 cases with 11.68 percent positivity rate while it recorded 2,376 cases alone in Dhaka city and upazilas of this central district in the past 24 hours.

The infection rate was 8.97 percent yesterday and 8.53 percent on the day before yesterday.

According to World Health Organization (WHO) the COVID-19 situation could be considered to be under control if the infection rate remains within 5 percent for a straight four-week period.

Under the WHO standard Bangladesh remained well below the danger line for over three months but authorities issued a fresh alert on November 27, 2021 for Bangladesh after the outbreak of the highly contagious new variant.

WHO has declared the omicron as a “variant of concern”.

"We have to follow the directives set by the National Technical Advisory Committee on COVID-19 to take effective steps for protecting people from the deadly virus," Maleque said.

The minister, however, said the government set a target to administer 280 million or 28 crore vaccine doses including booster ones by April this year.

“We are receiving huge quantity of vaccines every month,” he said adding that works were underway to expedite the nationwide vaccination campaign.