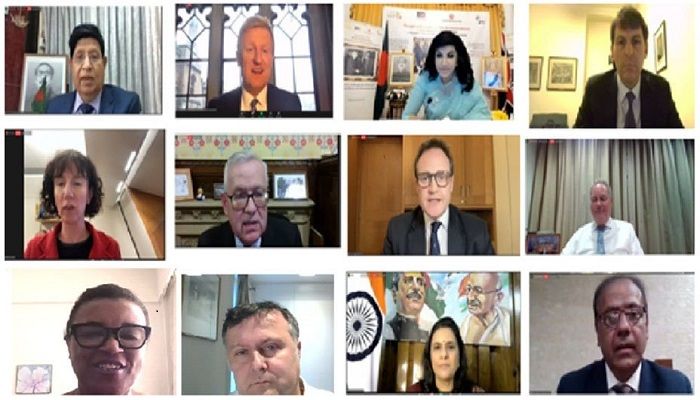 The award was launched on Monday at an event titled “Bangabandhu in Britain: The Historic 8 January” where British ministers, cross-party senior parliamentarians, diplomats, academics and eminent members of the British-Bangladeshi community paid rich tributes to Bangabandhu, a press release said today, reports BSS.

Bangladesh Foreign Minister Dr AK Abdul Momen joined as the chief guest at the juncture while UK Conservative Party Chairman and Minister Oliver Dowden was the guest of honour and Minister of State and Economic Secretary to Treasury Department John Glen, MP, was the special gust.

Momen said Bangabandhu’s maiden visit to the UK on January 8 in 1972 as the President of Bangladesh bears an unparallel historic, geo-strategic and diplomatic significance in the robust Bangladesh-UK diplomatic relations of 2022 and beyond.

He thanked British Prime Minister Boris Johnson for recognising Bangabandhu's 8 January visit to UK and Downing Street as instrumental in forging a friendship between Bangladesh and the UK.

Bangladesh High Commissioner to the UK Saida Muna Tasneem said “Bangabandhu-Edward Heath Friendship Award” will be given to those who would make extraordinary contributions in promoting Bangladesh-UK friendship.

The High Commissioner also announced the formation of an "8 January Foundation" to promote the significance of the historic day among younger people.

Dowden termed the Bangabandhu’s 8 January visit to the UK and meeting with Prime Minister Sir Edward Heath as a milestone in establishing diplomatic relations between London and Dhaka.

"It was a powerful symbol of the deep and enduring bonds between the UK and Bangladesh bound by kinship, culture, and shared prosperity," he added.

Minister of State and Economic Secretary to Treasury Department John Glen, MP, said Sheikh Mujib's maiden visit to the UK 50 years ago and his meeting with Edward Heath paved the way for a value-based relationship between the two countries.

The event began with laying of floral wreaths at the life-size portrait of Bangabandhu by the High Commissioner along with mission officers.

A documentary produced by London mission on Bangabandhu's historic 8 January visit was shown, the release added.

Sir Edward Richard George Heath served as British Prime Minister from 1970 to 1974 and Leader of the Conservative Party from 1965 to 1975.