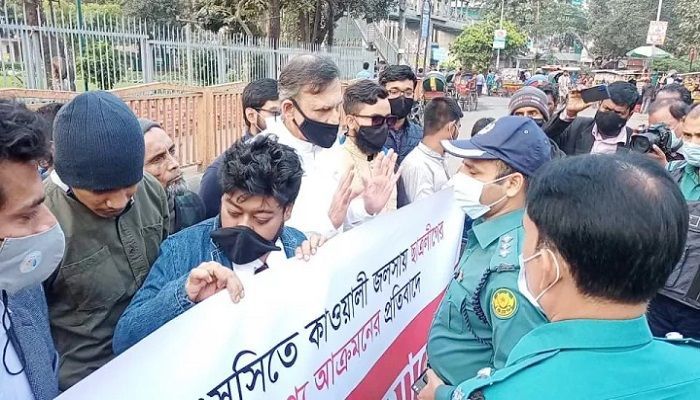 ﻿Police charged batons in a rally called by the People's Activist Coalition (PAC) in protest of the attack in the Qawwali concert in TSC. The incident took place at 4 pm on Thursday (January 13) at Shahbagh Chattar in the capital.

Witnesses said that when the activists started gathering at Shahbagh Chattar at 4 pm to protest against the attack on the Qawwali concert at TSC yesterday, the police asked them to call off the rally citing the restrictions due to the recent Covid-19 spread. But they continued the demonstration ignoring the police obstruction. At one point, when they started chanting slogans in protest of the attack, the police dispersed them by beating them with batons.

Asked about the beating, Shahbagh Police Station OC Moudud Hawlader said, "It is forbidden to hold any kind of meeting as per government restrictions. When they wanted to assemble, we had forbidden them. Then they left Shahbagh. No attacks were reported."