PM Urges Parents to Encourage Their Children to Play Outside 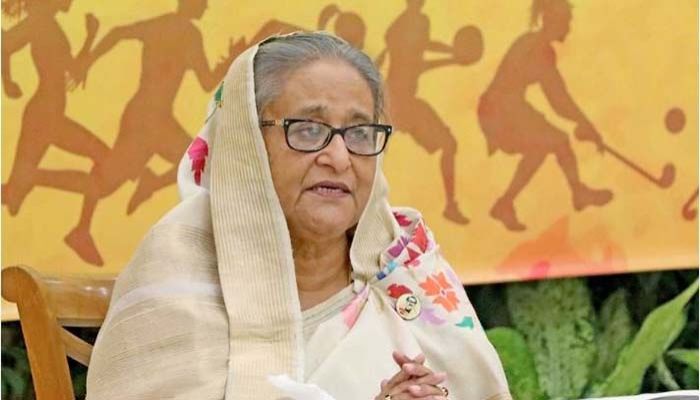 ﻿Prime Minister Sheikh Hasina today asked all concerned particularly the parents to encourage their children to play outside, which would help boost children's physical and mental health alongside stopping any kind of derailment, reports BSS.

"Most of our children are passing most of their time in flats engaging with mobile phones, laptops and ipads, which is an ominous sign of their physical and mental health," she said.

The Premier called upon the parents to take initiative for taking their children outside the home to play or run which is a must for their mental and physical wellbeing.

"I request all the guardians to be attentive regarding their children's engagement in sports. Sports, running and jumping help boost all sorts of flourishment in terms of physical and mental health. And for that they will not be derailed, she said.

She said these while virtually distributing the "National Sports Award" to 85 sportspersons and organisers from 2013-to 2021  in recognition of their gloriousdians contribution to the country's sports arena as the chief guest from her official  Ganabhaban residence here.

The Ministry of Youth and Sports organised the programme at the Osmani Memorial Auditorium.

The premier asked the authorities concerned to provide the award every year for encouraging players as well as organisers and for the overall progress of the sports.

On behalf of the Prime Minister, State Minister for Youth and Sports Md Zahid Ahsan Russel, MP, handed over the awards among the recipients.

Chairman of the ministry's parliamentary standing committee Abdulla Al Islam Jacob was present while its Secretary Mesbah Uddin gave the address of welcome.

Earlier, the Ministry of Youth and Sports has nominated 85 sportspersons and organisers for this prestigious National Sports Award in recognition of their contribution to the country's sports during 2013 to 2020.

Each awardee will receive an 18-carat gold medal weighing 25 grams, a cheque of Taka one lakh and a certificate.

Father of the Nation Bangabandhu Sheikh Mujibur Rahman's second son Shaheed Lt. Sheikh Jamal was given the award (posthumous) as player and organiser for the year 2020.

Sheikh Hasina said that all should realise that sports and physical and cultural practices are essential for building a nation.

"So, we have to encourage all especially the children to play outside the home," she said.

In this context, the Prime Minister said that her government is constructing Sheikh Russel Mini Stadium at each Upazila across the country.

She expressed her dismay over having inadequate playgrounds in Dhaka, saying, "We have already taken measures to this end. It is necessary to have playgrounds in every area."

The Premier said they are constructing a complex with having a stadium and training centre beside the Jatiya Sangsad Bhaban for the special needed children as they have achieved many successes for Bangladesh.

"I have witnessed the match," she said with a proud voice.

The Premier asked all concerned to give special attention to the special needed children.

She also asked all to pay special attention to women as they have been doing well in every sector of sports including cricket and football.

The PM, in her speech, also referred to Bangladesh's U19 Women's Team's victory in the 2021 Saff U19 Women's Championship after defeating India 1-0.

Sheikh Hasina has recalled the successes of  Bangladesh in sports including the recent first-ever test cricket match win against  South Africa on their own field and the win against Pakistan taking part for the first time in the World Cup Cricket in 1999 and the ICC Trophy win and becoming test playing member country in 2000.

"Bangladesh's success in the sports arena from 2009 to 2021 (till the date) has been increasing due to the Awami League government's timely and visionary measures," she said.

Since assuming power after the 21 years in 1996, she said her government has been taking everything possible measure for the overall development of the sports.

The Prime Minister said they are set to construct a stadium in each district to facilitate sports persons with every facility including training as they can cope with the international competitions and achieve more success for Bangladesh.

She said her government has been constructing Sheikh Kamal Sports Complex having a stadium in Cox's Bazar and a stadium in Sylhet which will add natural beauty of sea and hills respectively.

She also stressed the need for revival of the local or rural sports such as "sat chara" "dangguti" and "hadudu" alongside football, cricket, hockey and volleyball which require less money.

The Premier asked all concerned to arrange the local game competition at inter-school, inter-college and inter-university levels.

Sheikh Hasina described herself as a member of a sports family as her grandfather, father, brothers and sisters-in-law were players in various games.

"All of our families were involved in sports.--- there had always been relations between sports and our family," she said.

The Premier recalled her family's involvement in formation of the Abahoni Krira Chakra describing Sheikh Kamal as the pioneer of modern football.

Sheikh Hasina recalled that when she along with her younger sister Sheikh Rehana was leaving Dhaka for Germany, prior to the August 15, 1975, bloody massacre in which the Father of the Nation Bangabandhu Sheikh Mujibur Rahman along with most of his family members were killed, Sheikh Kamal wanted from her (Sheikh Hasina) to bring Adidas company boots for the Abahoni players.

But, the boots were not brought in as the 1975 carnage was happened and they had to spend six years in forced exile, she said with an emotion-charged voice.

The Prime Minister said Father of the Nation Bangabandhu Sheikh Mujibur Rahman had taken measures for the development of sports when he was rebuilding the war ravaged nation and its every institution as Bangabandhu knew sports is necessary for building a nation.

Bangbandhu had established the National Sports, Bnagladesh Footblall Federation and many other institutions for the development of sports, she added.