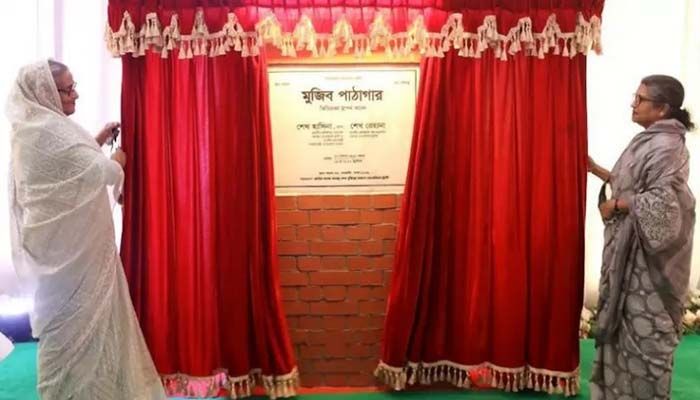 Prime Minister Sheikh Hasina on Saturday said repeated attempts were made to remove the name of Father of the Nation Bangabandhu Sheikh Mujibur Rahman from history and thus the nation was deprived of knowing the real history since 1975, reports BSS.

“But, it is not possible now as the new generation is very much aware of the country's true history," she said.

The prime minister made the remark while addressing the foundation stone laying ceremony of Father of the Nation Bangabandhu Sheikh Mujibur Rahman Memorial Trust Library at Dhanmondi-32 in Dhaka.

Prime Minister Sheikh Hasina and her younger sister Sheikh Rehana, the two daughters of Bangabandhu, jointly laid the foundation stone of the library.

Sheikh Hasina said the library of Bangabandhu Memorial Trust would help the new generation to know about the true history of Bangabandhu Sheikh Mujibur Rahman, the greatest Bangali of all time, and the country.

She said the anti-liberation forces had stopped the trial of the killers of Father of the Nation by enacting an indemnity ordinance after 1975.

The Awami League government has freed the nation from the stigma through the trial of the killers by repealing the indemnity ordinance after assuming power, she added.

The prime minister said her only goal is to build the country as a happy and prosperous "Sonar Bangla" and bring smiles on the faces of the people as dreamt by Father of the Nation.

Bangabandhu's grandson Radwan Mujib Siddiq was present on the occasion.