PM Hasina Says Conspiracy Being Hatched to Oust Her Govt 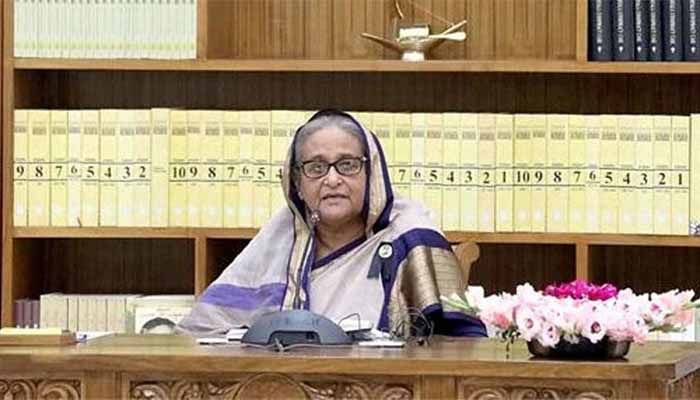 ﻿Prime minister Sheikh Hasina on Wednesday said that conspiracy is being intensified to topple her (Sheikh Hasina) from power as the national election is approaching nearer.

"Conspiracy was hatched before the national polls in 2014 and 2018. The intriguers are becoming active again to remove Sheikh Hasina from power as the national election nears," she said.

The premier made this remark while the newly elected board members of the Bangladesh Red Crescent Society paid a courtesy call on her at her official residence Ganabhaban in Dhaka.

Mentioning that she knows the conspirators are very much active to thwart the Awami League (AL) government, Sheikh Hasina said, "I know who are involved in this conspiracy and what they are doing. I know them very well and none is unknown to me."

She said the evil forces, involved in killing Father of the Nation Bangabandhu Sheikh Mujibur Rahman along with most of his family members including Sheikh Russel on 15 August 1975, are not liking the country's development under the leadership of a member of the Bangabandhu's family.

The prime minister said, "They even killed toddler Russel. I came from that family and formed a government, carried out the country's development, brought success and transformed the country into a developing nation. They (conspirators) don't like it and are out to oust my government."

She continued that she doesn't know what will be beneficial to them but the people of Bangladesh would have to suffer if the AL government is not in power.

If the AL is not in power, no development will take place in the country, she added.

The Russia-Ukraine war, sanctions and counter-sanctions are responsible for the price spiral across the globe, the Prime Minister said and urged all not to spare a single inch of land without cultivation as calamities may come from all around and it is already coming.

She noted that there are both natural and man-made calamities in the world.

Sheikh Hasina said, "I don't know who is gaining what from the war, only the arms manufacturing companies are making profits. Mass people are dying. The children are leading severe inhumane lives. This is very much unfortunate."

She said earlier that the Middle East and gulf countries had problems - now Russia and Europe.

Regarding the recent load-shedding, she said the government has introduced the system considering the future crisis as many developed countries across the globe have already suffered from power crises.

"We've taken the decision as precautionary measures to avert the crisis in the coming days," she added.

The premier mentioned that the government is advancing the country defying the impacts of the coronavirus pandemic.

"But, we have to go for personal savings and maintain austerity. We must not leave one-inch land without cultivation. If we aren't dependent on others for food production, it will be our best advantage. We are doing our job considering that matter," she said.

Sheikh Hasina said it is now proven truth that without the Awami League none worked for the welfare of the country and its people.

She said, "To me, power is the scope to serve the people and I always try to utilize the scope in the proper way."

Talking about the killing of 15 August, she said, "Sometimes I think about how the Bangalees could kill Bangabandhu for whom he sacrificed his whole life and tolerated unbelievable pain.

How could they do that, I am unable to calculate this matter."

"They killed my father, mother, most of my family members and other close relatives. By this killing, they couldn't do any welfare for the country and its people, rather the fate of the mass people plunged into the dark era," she observed.

During the meeting, the board members informed about the Red Crescent Society's activities during disasters, including flood, coronavirus and Rohingya influx.

They expressed their gratitude to the memory of Father of the Nation Bangabandhu Sheikh Mujibur Rahman for establishing the Bangladesh Red Crescent Society.

They also prayed for the peace of the departed souls of Bangabandhu Sheikh Mujibur Rahman and his family members who were killed in the August 15, 1975 carnage.