'Mastermind' of Robbery-Rape on Night Coach Arrested in Tangail 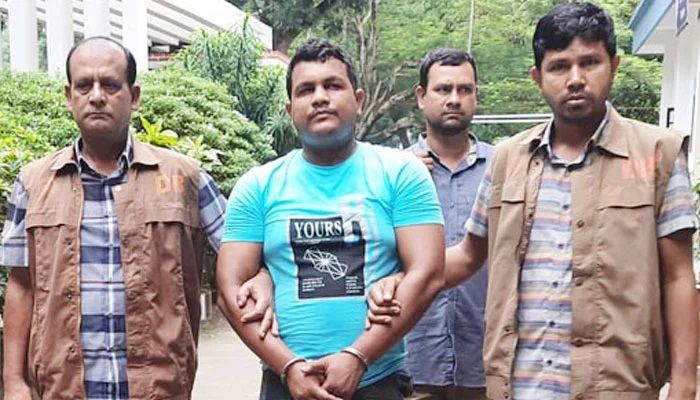 Detective Branch of Police (DB) has arrested the mastermind in the case of beating, robbing, blindfolding the passengers and raping a woman after getting on the night coach from Kushtia to Dhaka. He was arrested from Tangail Sadar Upazila around 5 am on Thursday. The arrested person has been identified as Raja Mia (32).

Earlier a bus of Eagle Transport left Kushtia with 24 to 25 passengers on its way to Dhaka on Tuesday night. When they reached Sirajganj late at night, a group of dacoits boarded the passenger bus. After crossing the Bangabandhu Bridge, the bandits took control of the bus. Then they tied the hands, feet, and eyes of the passengers on the bus and beat and robbed them. Then, they raped a female passenger on the bus.

Madhupur Police Station Officer-in-Charge (OC) Mohammad Mazharul Amin said the bus stopped for dinner at Dibaratri Hotel near Sirajganj. The journey started again around half past one. On the way, 10 to 12 young passengers carrying bags on their shoulders boarded the bus. After the bus crossed the Bangabandhu Bridge, the young gang on board tied up the passengers at gunpoint. Within minutes, mobile phones, cash, and gold ornaments were looted from the passengers. Then they raped a female passenger. The bus was kept under control for three hours by turning around at different places. Later, after changing the route, the bandits fled by overturning the bus on a sand pile near Raktipara Jame Masjid of Madhupur Upazila on Tangail Mymensingh Road.

The OC also said, "In this incident, a passenger of the bus filed a case against unknown persons as the plaintiff. The rape victim has been admitted to the Upazila health complex. She will be sent to Tangail General Hospital for medical examination. The matter is being viewed with utmost importance."