Bus Overturns with Half a Hundred Garment Workers in Dhamrai 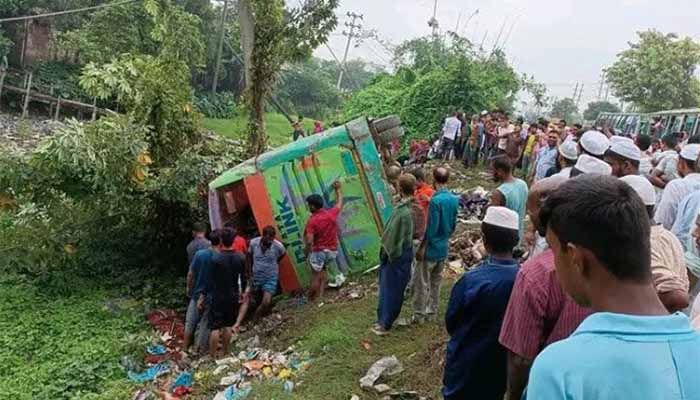 ﻿A bus carrying around half a hundred garment workers overturned in Dhaka's Dhamrai. At least 10-15 passengers were injured. The injured are being treated at Dhamrai Upazila Health Complex.

The accident took place at Dautia area of ​​Sombhag Union on Dhaka-Aricha highway around 7 am on Thursday (August 3).

According to the Fire Service, the D Link (Dhaka Metro-J-14-0619) bus was coming to Balitha's Rising Garment Factory by picking up passengers from Savar, Nabinagar, Nayarhat, Islampur, Dhamrai Thana Road and Dhulivita areas in the morning. When the bus reached Dautia area of ​​Dhaka-Aricha highway, the bus collided head-on with a reckless truck coming from the other side. At that time, the bus went off the road to avoid an accident and lost control and fell off the road. At least 10-15 passengers of the bus were injured. Later fire service came and rescued them.

Dhamrai Fire Service Station Officer Sohail Rana said, after receiving the information, he went to the spot and rescued the injured and sent them to the hospital.