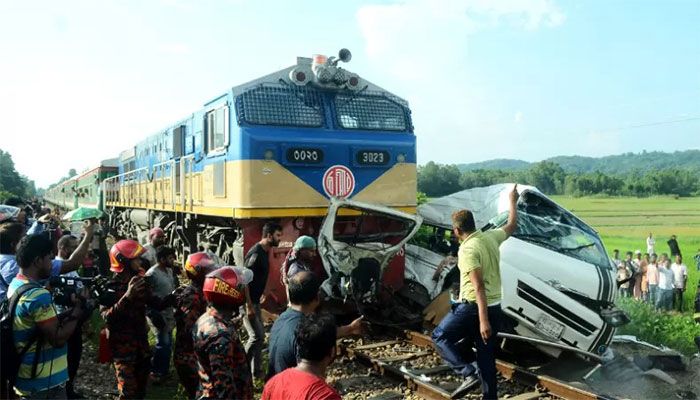 The Chattogram-bound Mahanagar Provati express from Dhaka ploughed through the microbus, dragging it around a kilometre down the railway track || AFP File Photo

﻿A 21-year-old student succumbed to injuries on Friday, raising the death toll to 12 from the accident involving a running train hitting a microbus stuck on a level crossing in Mirsharai Upazila in Chattogram, a hospital doctor said.

The deceased was identified as Ayat Hossain, of Hathazari Upazila, a passenger of the ill-fated microbus, reports UNB.

Dr Noman said Ayat was treated in the intensive care unit (ICU) as his oxygen saturation was very low. He suffered severe head and neck injuries in the accident.

“His condition started to deteriorate this morning,” he added.

On July 29, eleven people, all aged 20 to 30, died after a speeding express train hit the microbus carrying them at a level crossing in Mirsharai. Seven of them were SSC and HSC examinees, while three of them were young teachers from a coaching centre named ‘R&J Private Care’ and another was the microbus driver.

They were returning home to the Aminbazar area of Hathazari after a tour of the Khoiyachora Waterfall in the hills of Mirsharai, according to accounts of rescue workers.

The Chattogram-bound Mahanagar Provati express from Dhaka ploughed through the microbus, dragging it around a kilometre down the railway track.