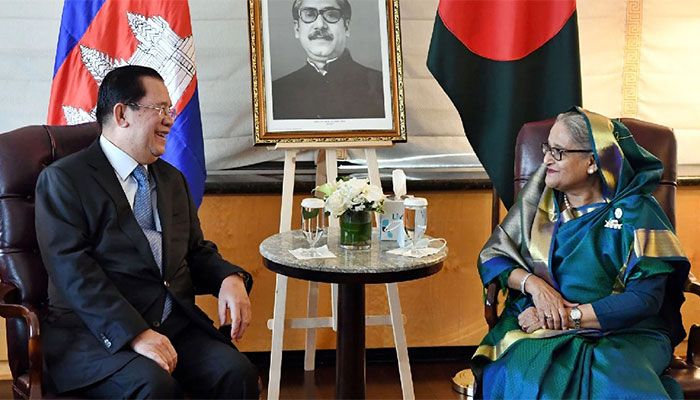 Bangladesh and Cambodia are likely to sign a Free Trade Agreement (FTA) to boost the bilateral trade between the two Asian countries, reports UNB.

Foreign Minister AK Abdul Momen said this while briefing the reporters about the activities of PM Sheikh Hasina on the sidelines of the 77th United Nations General Assembly (UNGA).

The bilateral meeting, held at her place of residence, discussed issues of bilateral cooperation between Bangladesh and Cambodia.

Hasina expressed her interest for FTA with Cambodia, while her Cambodian counterpart Hun Sen agreed to this proposal.

The Cambodian PM expressed his interest in signing an agreement on the export of rice from Cambodia to Bangladesh.

He also invited Bangladesh to invest in agricultural and physical infrastructural development in Cambodia.

Hun Sen assured the Bangladesh prime minister that Cambodia, as the chair of ASEAN, will continue all efforts to resolve the Rohingya issue, said Momen.

Also on Thursday PM Hasina held a meeting with IOM Director General António Vitorino at her place of residence here in New York.

In the meeting, the premier said the International Organisation for Migration (IOM) can assist the migrant sending countries by making effective recommendations to address the challenges the countries are facing due to Covid pandemic and the Ukraine war.

Sheikh Hasina thanked IOM for its cooperation in repatriating Bangladeshi victims of trafficking to various countries including Libya and the European Union.

The IOM Director General appreciated the steps taken by Bangladesh for the welfare of migrants and expressed hope that the areas of cooperation between Bangladesh and IOM would expand in future, said the Bangladesh foreign minister.

Later, the Bangladesh premier held another bilateral meeting with President of Kosovo Vjosa Osmani-Sadriu at the same place.

In the meeting, the issues of bilateral cooperation between Bangladesh and Kosovo were discussed.

Leaders of Bangladesh Hindu-Buddhist-Christian Unity Council also called on the prime minister at the same venue on Thursday.