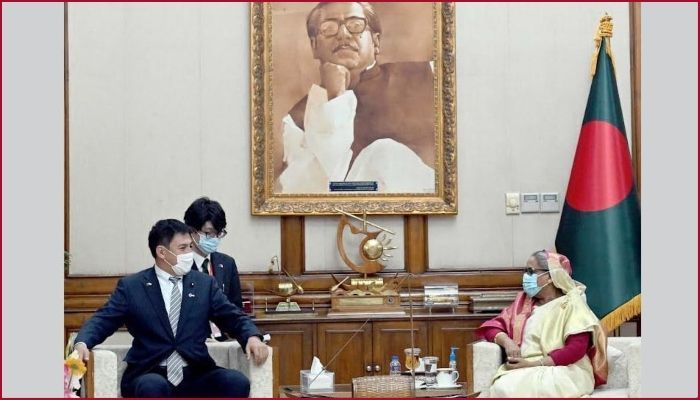 Japanese State Minister for Foreign Affairs TAKEI Shunsuke said sustainable repatriation of the forcibly displaced Rohingyas would be possible after resumption of democracy in Myanmar.

He said this while paying a courtesy call on Prime Minister Sheikh Hasina at her official Ganabhaban residence here this evening.

"Japanese state minister for foreign affairs said Japan supports Bangladesh on Rohingya issue. In reply, the Prime Minister said that Japan can talk with Myanmar over Rohingya repatriation. The Japanese state minister said that it is required to wait for restoration of democracy in Myanmar for sustainable repatriation of Rohingyas," PM's Press Secretary Ihsanul Karim told a briefing after the meeting.

Sheikh Hasina said Rohingyas have become a heavy burden for Bangladesh as it has elapsed five years since they took shelter in Bangladesh and their number is increasing with the taking birth of new babies in the camps.

"The biggest thing is that many of the Rohingyas are involved in drug and arms trafficking," she said, adding that they (Rohingyas internal groups) are fighting and killing each other.

She said, "Myanmar should take back their nationals."

Sheikh Hasina described the relations between Bangladesh and Japan as wonderful and said Father of the Nation Bangabandhu Sheikh Mujibur Rahman had laid the foundation of the ties.

"The relations between Japan and Bangladesh have been growing from stake to stake," she said.

The Prime Minister with due respect recalled the contribution of Japan to the Liberation War of Bangladesh and in rebuilding the war ravaged country soon after the independence.

She also recalled the Japanese cooperation of Bangladesh's development efforts, saying, "They are still working in Bangladesh's various development projects including the Matharbari and third terminal of Hazrat Shahjalal International Airport."

He said he visited Bangladesh five years ago and now he has become astonished witnessing the huge development took place in the last five years under the dynamic and visionary leadership of Prime Minister Sheikh Hasina.

He said the operation of flight between Dhaka and Tokyo nearing 50 years and diplomatic relations between Japan and Bangladesh will promote connectivity in the days to come.