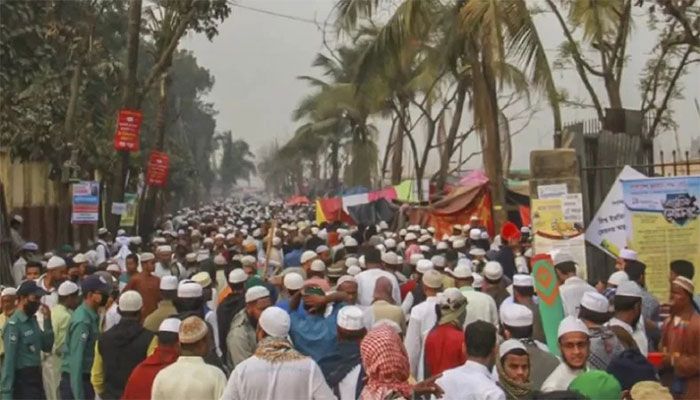 The second phase of three-day Bishwa Ijtema, the second-largest global congregation of Muslims after Hajj, is underway on the banks of the Turag River in Tongi, on the outskirts of Dhaka, reports UNB.

The congregation that began on Friday with "aam bayaan" (general sermons) after Fajr prayers with the participation of a large number of devotees, including the followers of Indian preacher Maulana Muhammad Saad Al Kandhalvi, will end on Sunday through Akheri Munajat (final prayers).

Devotees from home and abroad took part in the religious event to seek divine blessings of the Almighty Allah.

Five devotees have so far died at the Ijtema venue during the second phase as two more devotees died due to old age complications on Friday night and Saturday morning.

Health camps were set up for the devotees to provide them with treatment like the previous years.

Meanwhile, the metro rail service will run from 8am to 5pm on Sunday for smooth movement of the devotees attending the second phase of the congregation.

The first phase of the 56th Bishwa Ijtema ended on January 15.

Tabligh Jamaat has been organising the congregation in Tongi since 1967. In 2011, it divided Ijtema into two phases to accommodate a large number of attendees.