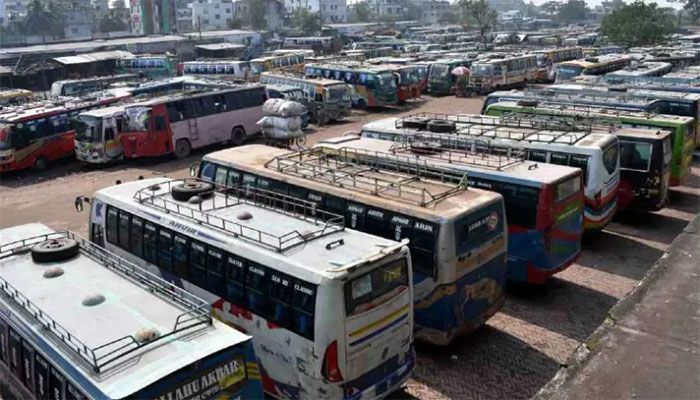 Buses are staying off in Sylhet || UNB Photo

Five hours after enforcing an indefinite strike, Sylhet District Transport Oikya Parishad called off their strike on Monday upon assurance from the local administration about meeting their demand.

They went on strike, demanding the release of Chhatra Dal leader Ali Akbor Rajon who was arrested in a sabotage case, reports UNB.

They withdrew their strike around 11 am, said Mainul Islam, president of Bus-Minibus Workers' Union.

He said the transport strike has been suspended due to the assurance from the administration.

The transport services already resumed in the district.

On Sunday, Sylhet District Transport Oikya Parishad called for an indefinite strike starting from 6am Monday.

"Ali Akbor Rajon has been in jail for one and a half months as he was denied bail. The strike will continue until he is granted bail," Mainul added.

Rajon has been involved in the politics of Bangladesh Nationalist Party (BNP) and he is the joint general secretary of Sylhet District Chhatra Dal.

He is also the joint general secretary of the Bus-Minibus Workers Union Committee.

On 7 December, 2022, police arrested Rajon from the Surma Market area of the town in a sabotage case lodged in 2018.