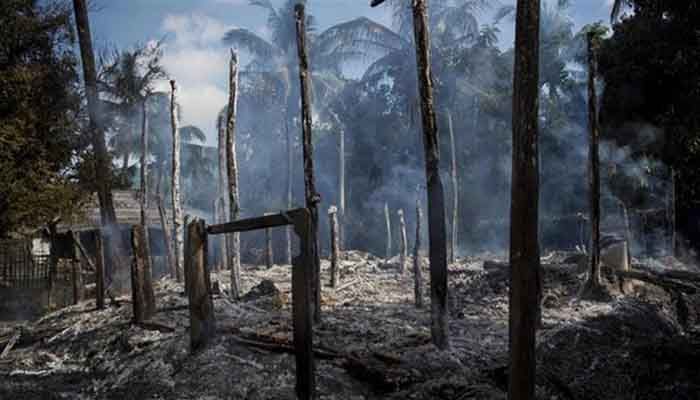 Myanmar has removed a Rohingya village from their official map of Myanmar. This information was given by the UN mapping unit. They say the village of Kan Kia does not exist in the new map of the country created by the Myanmar government last year. The name of the village has been deleted from the map.

Hundreds of people lived in the village of Kan Kia, about 5 km from the Naf River. In 2016, Rohingya villages in Rakhine were set on fire in Kan Kiya during a Myanmar military operation. The residents fled the village to save their lives. The whole village was burnt down. The marks of the burnt body of the village were also mixed with the soil by bulldozers. The United Nations has called it "genocide."

During the army operation in Rakhine, about seven and a half lakh Rohingyas fled and took refuge in neighboring Bangladesh. Many of them had bullet wounds or burns on their bodies. The descriptions of the refugees paint a grim picture of Myanmar's military's brutal crackdown on civilians. The UN International Court of Justice (ICJ) is hearing allegations of "genocide" against Myanmar's military.

The village of Kan Kia is now home to more than a dozen government and military buildings. Even the satellite image shows the zigzag fence provided for the police base. Those pictures can be found on Google Earth. A few photos have also been sent to Reuters from Planet Lab.

The UN's mapping unit in Myanmar has drawn up a new map of the country by 2020. The UN's 'mapping unit' draws its own maps based on official maps of Myanmar. Various organizations under the United Nations use that map.

They said that the name of the village that was demolished in the new faith map is no more. Rather, the place is now being called an extension of the nearby town of Maungdaw.

According to Human Rights Watch, a New York-based human rights group, the Myanmar army destroyed at least 400 villages during the 2016 operation. They have given this information by analyzing the satellite images. The names of at least a dozen of the destroyed villages have now been removed from the map, the agency said.