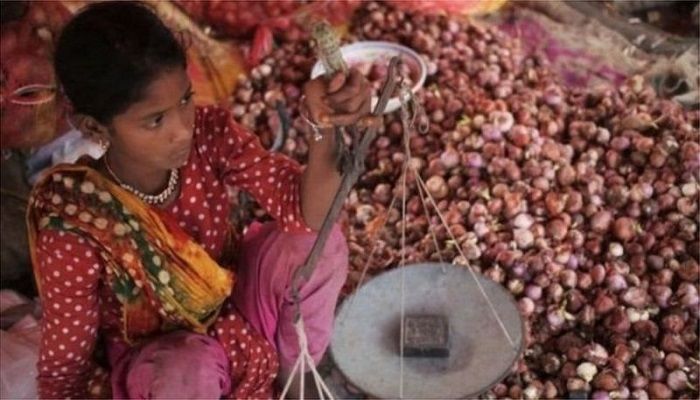 ﻿Onion prices in Bangladesh have shot up by one-third in a single day after India banned onion exports all of a sudden.

However, buyers in Bangladesh are afraid that if the situation is not handled, the price of onion is likely to go skyrocket like last year.

In September last year, the price of onion in Bangladesh exceeded Tk 300 per kg after India banned the export of onion. India is the largest exporter of onions in the world.

Talking to onion importers and wholesalers in Bangladesh, it is learned that the onions that are being sold in the country at present are those produced in the country or previously bought at low prices.

But the sellers have increased the price of onions in their hands as imports from India have stopped.

Sohana Yasmin, a buyer from Kalabagan in Dhaka, says that ''the onion that I bought two days ago for 60 takas, how can it be 100 taka today? I understand that India has stopped exporting, but I have already bought this onion. So how did the price go up?''

Shopkeeper Al-Amin, however, claims that he had to buy from the wholesale market at a high price. That is why he is also selling at a higher price.

GS Manik, a wholesaler in Dhaka's Shyambazar, told BBC Bangla: They have increased the price to make more profit. "But most of Bangladesh's onion imports are from India. The price of onion will naturally go up as imports from there are stopped. Because it will take time to bring onions from Myanmar, Pakistan, Turkey, or Egypt.

GS Manik, however, does not think that onions will go towards skyrocketing prices like last year.

''We have a preparation this year. I also have experience in importing onions from last year. Besides, the stocks in the country will last at least two more months. I don't think the price of onion will be the same as last year," said Manik.

A mobile court on Tuesday raided the wholesale market Shyambazar for selling onions at unreasonably high prices. Several businesses have also been fined during this time.

Bangladeshi importers say they have no idea beforehand that India will ban onion exports.

Haji Hafiz Mia, head of an importing company called Pavitra Bhandar in Shyambazar, said, "Suddenly they imposed the ban. Prices were rising in the Indian market for a few days. But there was no indication that they would stop exports. "

He said the onions of many Bangladeshi traders are now stuck in cars inside India. Many have opened Letters of Credit or LCs, but have not been able to bring them.

India has not given a date for lifting the ban. Why this ban in India?

The Indian Ministry of Commerce did not give any reason for the ban on onion exports. However, the BBC's Shubhjyoti Ghosh says the ban is due to the volatile onion prices in the Indian market over the past few weeks.

"Especially last year, when onion exports were banned, the Maharashtra elections came a few days later. This time there is an election in Bihar a few days later. As a result, the government does not want any dissatisfaction with the price of onion at this time. All in all, these political calculations are thought to have worked in the case of banning onion exports.''

The wholesale price of onion in Maharashtra, India, has tripled in the last month. Onion cultivation in Karnataka and Andhra Pradesh in particular has been severely affected by heavy rains.

Prices have also gone up in foreign markets.

The price of onion has gone up by 50 to taka 100 per tonne in the international market in a single day.

Haji Hafiz Miah, an importer from Shyambazar, said, "We are in contact with Myanmar, Turkey, Egypt and Pakistan after India stopped exporting. But even there the price is higher today than yesterday. The Indian market is closed, so everyone is in touch with onion traders in these countries. They have also increased the price.''

However, the big problem of importing onions from these countries is that it takes 20 days to a month to bring these onions to the country by ship. Even with the border closed, Bangladesh's other neighbor, Myanmar, has to bring onions from Singapore, which can take up to three weeks.

Many importers have already started contacting Myanmar, Pakistan, Egypt and Turkey to open LCs. Some importers fear that if they reopen their markets within a month after opening LCs for onion imports from these countries, they will incur huge losses. Because the demand for Indian, Myanmar or Pakistani onions is higher in the market of Bangladesh after the local onions.

Shyambazar trader Rafiq Haji says, ''If I go for importing onions from Egypt or Turkey and India reopens the market within 3 weeks. Then I will not be able to sell these onions. That is why many businessmen are not getting the courage to open LCs from other countries.''

He suggested that if the government guarantees that they will buy onions or even restrict the import of Indian onions from Bangladesh even if exports are introduced, they can take the risk.

What is the government's plan to handle the crisis?

After India stopped onion exports on September 29 last year, the government tried to handle it by importing onions along with private importers. But even then the price of onion went up from Rs 30 to Rs 300.

What is the government planning to avoid that situation?

The government is trying to handle the situation by selling onions in the open market at low prices. Besides India, it has also started looking for alternative markets.

"We will try to import onions from alternative markets," Tipu Munshi, Bangladesh's commerce minister, told BBC Bangla. We have had some experiences since last year. From Myanmar, Turkey, Egypt, China. The situation will be better if it is possible to import from outside. "

"But this time the situation will not be like last year. Because there are enough onions in the country. It may not be 30/40 rupees, but it will not be sold at the same price as last year. We are looking for different markets. Hopefully, I will be able to handle the situation by bringing onions from other places, ”he says.

Md. Humayun Kabir, spokesperson of Trading Corporation of Bangladesh (TCB), a government-owned company, said, "We have been selling onions at 265 points for a long time." Those activities will continue. Besides, the regular process of importing onions from other countries is also continuing.