Why Rohingyas Are Killing Each Other! 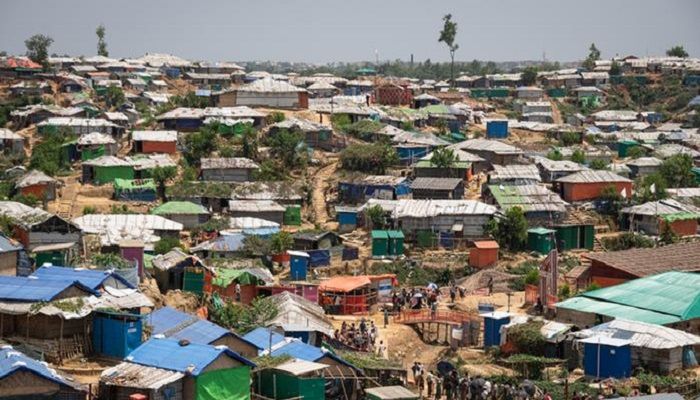 ﻿﻿At least eight people have been killed in a week of clashes between two groups of Rohingya at the Kutupalong camp in Cox's Bazar. The clashes have not been stopped even after conducting joint operations. Ordinary Rohingya refugees and Bangladeshi citizens are in panic.

According to local sources, the conflict is centered on the dominance of various illegal businesses, including drugs. Some have claimed that local drug dealers have contacts with these groups. Multiple sources claim that Myanmar's military is behind this and that Myanmar is the main source of weapons for Rohingya terrorist groups.

Kupalong camp in Ukhia is the largest Rohingya camp. Kutupalong and Nayapara in Teknaf - these two camps are registered but the total number of camps is 34.

Chittagong Range Police DIG Anwar Hossain said. "A total of eight people have been killed this week in Kutupalong. The bodies of the deceased are in the morgue of the local hospital. Joint forces are conducting operations in the camp area. Now the situation is under control. The situation is tense even though the shelling in the camp has stopped."

"There are two terrorist groups in the camp, the Munna and Sadeq groups of Rohingyas. But here the issue is, Munna and Anti Munna. There is a clash between them. The main reason for the conflict is the dominance of the camp. Those in control of the camp control illegal trade," he said.

However, after talking to the locals, it was learned that there are various reasons for the conflict in the camp. The conflict between registered and non-registered Rohingyas is very old. Besides, ARSA also has an effect. There are also a number of groups working for the Myanmar military. They provide information from here. They are also armed.

It is known that the Rohingya camp-based drug trade is a big source of money. Yaba from Myanmar is stored in the camp and distributed from here. Besides, tolls are collected from many shops in and around the camp area and there is a big market for the surplus relief items available to the Rohingyas. There are 7-8 markets inside the camp. A lot of money is collected from there.

Munna unregistered Rohingya and Sadeq registered Rohingya. There are allegations of ARSA's communication of Sadeq. Ukhia Upazila Chairman Hamidul Haque Chowdhury said, "There are many unregistered Rohingyas now. The registrants came first and they are less than 6 in number. As a result, the conflict of domination is intensifying. And this dominance is needed to earn money in various ways, according to him. Among the Rohingyas who have come in the last four years are yaba traders. They can make yaba We think they have built such a factory inside the camp There are some Rohingyas who come to Myanmar regularly even though they are in the camp They are involved in arms and yaba smuggling In the last one month, 2 million yaba have been recovered from the Rohingya. "

On October 2, RAB found a weapons factory in Palangkhali near the Kutupalong Rohingya camp. Two firearms, two rounds and weapons-making equipment were recovered from there Two persons named Majid and Robi were also arrested Their home is Maheshkhali and they are artisans "They were making weapons and selling them to the Rohingya," the RAB said.

Abul Morshed Khoka, president of Cox's Bazar Civil Society, claimed, "Weapons with drugs also come to the Rohingya camp from Myanmar. We have information that Myanmar army spies are also active at this time They are giving arms They want to cloud the situation here There are some more active groups including Arsa It's a complicated situation. "

However, DIG Anwar Hossain said, "We do not know whether arms come from Myanmar." However, those involved in the conflict are armed Moreover, there are 6 drug factories in the camp There are many incidents in the camp which are not known They do not dare to report because of the terrorists. "

Hamidul Haque Chowdhury said, “Rohingya Casp is a golden egg-laying duck And this conflict is under his control Involved are local drug dealers, smugglers and arms dealers."

There are more than five lakh Rohingyas in Kutupalong camp alone As it is the largest camp, any incident there affects other camps as well Yunus Arman, a Rohingya spokesman at the Kutupalong camp, was repeatedly called to inquire about the situation but did not answer.