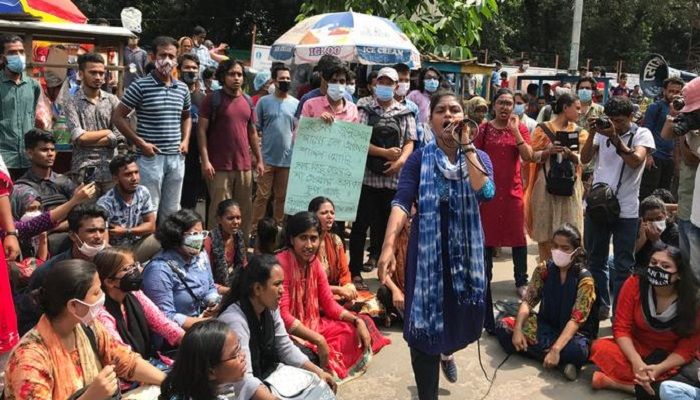 Women Leaders and activists of student unions participating in the anti-rape movement in Bangladesh have been allegedly receiving threats of rape over the phone and Facebook messengers. One of them also posted a screenshot of such a threat on her Facebook status.

She is Mahmuda Deepa, Education and Research Secretary of the Lalbagh Branch of the Student Union and a member of the Dhaka Metropolitan Committee. Apurba Hossain wrote to him on Facebook Messenger, "if I see you in Shahbag with a mic in your hand, you will not be able to go back home. I will rape and kill you there.'' Most of the text in this messenger message is unpublished.

Mahmuda, a member of the Dhaka Metropolitan Committee of the Student Union, wrote on her Facebook status with a screenshot of the message, "I don't know who this gentleman is, but how long has he been threatening me like this? He blocked me with a message. The movement cannot be stopped by intimidation."

When contacted by Deutsche Welle, Mahmuda Deepa said the message came on her messenger on Sunday morning. She has not been able to take any action in this regard due to her illness. However, she informed the party leaders about this matter and will take the next step according to their advice. Mahmuda Deepa also mentioned that not only her but also a few others like her are receiving such threats. Meanwhile, the education and research affairs secretary of Jagannath University was also called and threatened with rape, she said.

Anik Roy, general secretary of the Student Union, told Deutsche Welle: "Many leaders of our organization are being told via SMS on their mobile phones that if they speak out against the government again, they will be gang-raped in Shahbag. They are constantly threatening."

Anger at the police headquarters statement

Meanwhile, the protesters expressed their displeasure in a statement issued by the Bangladesh Police Headquarters on Saturday regarding the anti-rape movement. "I am not affiliated with any political party," Al Mamun, a student in the history of Islam at Dhaka University, told Deutsche Welle. But I am protesting in the streets against the conscience-driven movement against rape. ''The way rape has increased, any healthy person will protest it. But the protesters cannot be stopped by threats. I haven't been there before. Instead, I think law enforcement should focus on arresting the rapists and their accomplices, without threatening the protesters'' he further said.

Anik Roy told Deutsche Welle: "Such threats cannot stop the movement. We have seen that wherever these misdeeds are taking place, there is some involvement of leaders and activists of various organizations of the ruling party. The government is now trying to control these misdeeds through threats.''