North Korea: How Much Is Known about the New 'Giant' Missile! 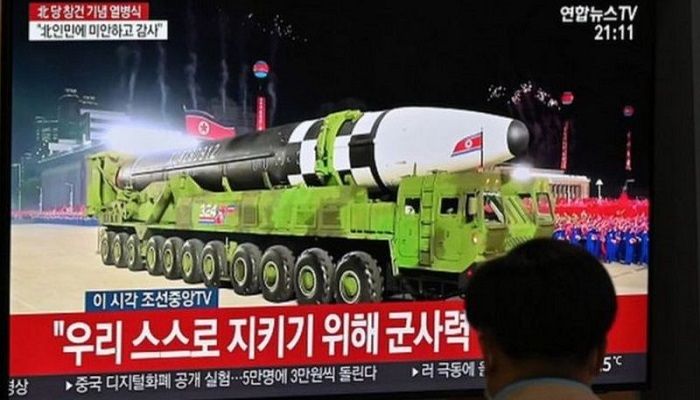 ﻿The military parade in Pyongyang shortly after midnight on Saturday to mark the 65th anniversary of the founding of North Korea's ruling Workers' Party is unprecedented.

The dazzling parade, to be held without any misunderstandings with the participation of a large number of people, is the responsibility of North Korea.

Chairman Kim Jong Un delivered an emotional speech on the occasion. He has wiped his eyes a few times while talking about the history of his country's struggle.

But the unveiling of a new intercontinental long-range ballistic missile (ICBM) was the highlight of Saturday's midnight ceremony.

On January 1, 2012, Kim Jong Un announced in his New Year's speech that North Korea was developing sophisticated weapons that were "in the hands of only a few modern states."

He said his government was in the process of building a "strategic" - nuclear - weapons stockpile.

Mr. Kim raised the issue of his country's relations with the United States that day.

"The more the United States delays its relationship with the DPRK, the more it will feel helpless in the face of the power of the Democratic People's Republic of Korea," he said. The DPRK is saving more energy than imagined, and (about) stagnation will take the United States deeper into the abyss. “

A grand military parade in Pyongyang at midnight on Saturday to mark the 75th anniversary of the founding of the ruling Workers' Party.

The promise of nuclear weapons 10 months ago. That's what Kim gave to this new ICBM, and its target is the United States. Such a weapon was inevitable due to the failure of the relationship development process.

The new threat to the US missile defense system

North Korea has already tested two ICBMs. Twice in 2016, they tested Huasong-14. Capable of carrying an atomic bomb, the missile is capable of hitting targets at a distance of 10,000 km (6213 miles).

That means the whole of Western Europe and half of the mainland of the United States is now under this Korean nuclear missile.

That same year, in 2016, North Korea tested another of its nuclear missiles, the Huasung-15, with a range of 13,000 kilometers. That means it is capable of hitting anywhere on the mainland of the United States.

The new ICBMT that was unveiled on Saturday night has not yet been tested. However, it is also a two-stage liquid-fuel missile, but it is much larger in length and breadth than the Huasang-15.

How far it is, that is, how far it is capable of hitting the target, cannot be said until the technology of its instrument is known or tested.

But the design makes it clear that North Korea's goals and objectives are clear: they no longer need to increase its missile range. Instead, they are now trying to apply the technology to place multiple atomic bombs on a single missile.

Its success will create new headaches for the US missile defense system, as many missiles have to be fired simultaneously to prevent an atomic bomb. Now if North Korea is able to place multiple warheads or bombs on a single missile, it will put more pressure on the defense system.

The immediate cause for concern

Looking at the design of the new ICBM North Korea has demonstrated, it is difficult to imagine when it will be tested or deployed. However, the trucks on which it has been carried have raised additional concerns.

One of North Korea's greatest weaknesses for engaging in a nuclear war is its lack of sufficient launchers.

According to US intelligence, North Korea has six launchers capable of launching a total of 12 ICBMs before retaliating against the United States.

In 2010, North Korea secretly imported six WS51200 heavy-duty trucks from China. It then uses hydraulics technology to turn them into launchers capable of launching missiles.

The six new missiles were carried on Saturday night's parade on that type of truck, but this is the first time more than six such trucks have been spotted. In other words, North Korea may now be able to build or procure these trucks on its own.

So it is clear that despite US sanctions, North Korea is still able to procure equipment for heavy-duty missile launchers, and perhaps even the launchers themselves.

North Korea's new ICBM sends the same message to the rest of the world - not to underestimate their state, leadership and the technological capabilities of their people.