Countries Other than Bangladesh with Maximum Penalty for Rape 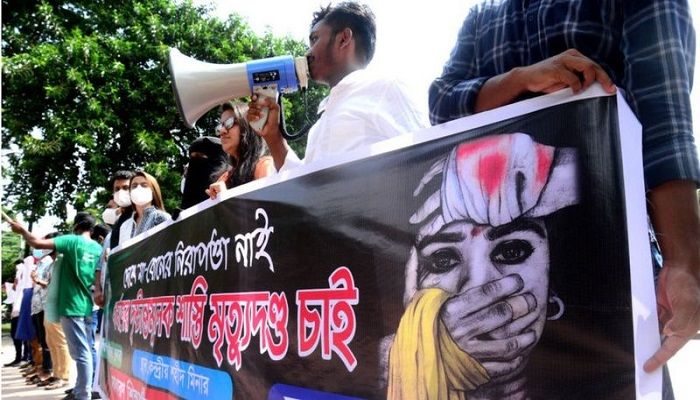 ﻿On October 12, the cabinet approved a decision to amend the Prevention of Violence against Women and Children Act in Bangladesh and add the death penalty as the maximum punishment for rape.

The next day, the President of Bangladesh signed an ordinance in this regard, which made the amended law effective.

In Bangladesh, the penalty for rape under the Women and Child Abuse Suppression Act, 2000, the maximum punishment for rape so far was life imprisonment under Section 9 (1).

However, in case of death or injury of the victim or child in the case of gang rape, death, or injury, the maximum penalty was death or life imprisonment. In both cases, there is a provision of a minimum fine of one lakh rupees.

The law has been amended to provide for the death penalty or life imprisonment only if convicted of rape. There is also a provision of fine.

As a result, Bangladesh is the seventh country to impose the death penalty as a punishment for rape.

According to Reuters, an executive order passed in 2016 sentenced the death penalty for raping a girl under the age of 12 in India. The decision was taken in the wake of ongoing anti-rape protests across India at the time.

Under Indian criminal law, if the victim dies as a result of rape or falls ill in such a way that he is unable to move in any way, the punishment for the offender is death.

In other cases, Indian law provides for a minimum sentence of ten years if rape is proved.

Pakistan's criminal law provides for the death penalty as the maximum punishment for rape. Pakistani law, like in India, provides for a minimum sentence of 10 years if convicted of rape.

In addition, the Penal Code of Pakistan provides for the death penalty as the maximum punishment for two or more persons who commit a crime such as rape or gang rape for the same purpose.

Pakistan's Prime Minister Imran Khan has spoken out in favor of killing or raping rapists in public after a highway rage sparked riots in Pakistan last month.

In addition to the provision of severe punishment against rapists, the identity of the victim of rape has been revealed, but there is a provision of imprisonment for up to three years in Pakistan.

According to Reuters, there were 150 executions in Saudi Arabia in 2019, eight of which were for rape.

According to the international human rights organization Amnesty International, a total of 250 people were executed in Iran in 2019, 12 of whom were convicted of rape.

Amnesty says Iran has the second-highest number of executions in the world after China.

Under UAE law, forcible sexual intercourse with a woman is punishable by death.

However, under the law of the land, the victim is considered to be coerced only if he is below 14 years of age at the time of the crime.

Although no executions were carried out in the UAE in 2019, at least 16 people have been sentenced to death for murder, rape and armed robbery.

In China, the maximum punishment for raping a woman or having sex with a girl under the age of 14 is death if the victim dies or is seriously injured.

The country has a death penalty without regard to age, in the case of organized rape, if the victim dies or is seriously injured after the rape, or if the rape takes place in a public place. In addition, the offender can be sentenced to death even if convicted of multiple rapes.

Under common law, rape is punishable by a minimum of three to 10 years in prison under Chinese law.

Criticism of the death penalty provision by Amnesty International

Amnesty International has issued a statement criticizing the decision to implement the death penalty as the maximum punishment for rape in Bangladesh. They commented that "extreme punishment perpetuates violence, not prevents it."

Sultan Mohammad Zakaria, the organization's South Asia researcher, said in a statement that long-term reforms were needed to ensure justice for victims of sexual violence without focusing on retaliation, as well as to eradicate the rape epidemic and prevent its recurrence.

At the same time, Amnesty International called for ensuring that the perpetrators are punished and that a culture of impunity is stopped.

That is why Amnesty is opposing the death penalty

Amnesty's Sultan Mohammad Zakaria told BBC Bangla: "No justice system in the world is perfect. As a result, if a person is found to be innocent after taking the life of a person in the justice system, then there is nothing to be done."

And in Bangladesh today, there is little to do with increasing or decreasing the level of punishment for rape and violence against women.

"According to our analysis, the problem in Bangladesh is systemic. That is, we have some problems in the law and in the judicial process here. Zakaria.

He said that a large part of the cases of violence against women are not punished as the government itself. One of the main reasons for not being able to ensure punishment is the lack of legal assistance due to loopholes in the law and social pressures.

"According to the government's One-Stop Crisis Center, victims seek legal assistance in 26 percent of cases, of which 0.36 percent are punished."

So Sultan Zakaria thinks that there is no reason to think that this picture will change as the level of punishment increases.

Citing data from the human rights group Odhikar, she said that from 2001 to 2019, a total of 1,509 women and children died after being raped and 181 committed suicide. He adds that this number does not represent the actual figure, but rather that it is a very small part of what is happening.