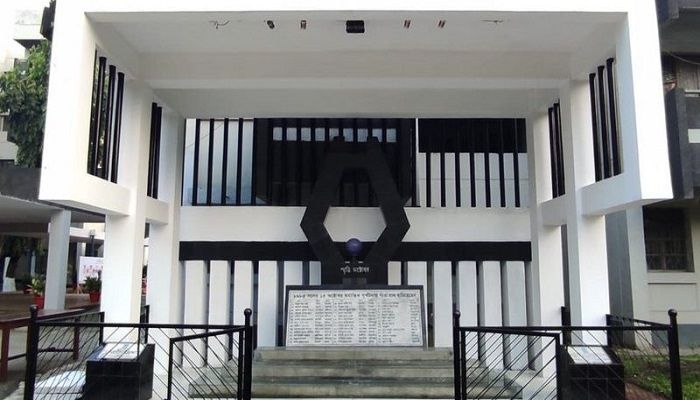 ﻿Exactly 35 years ago, on October 15, 1975, the roof of a hall of Jagannath Hall collapsed, killing 40 people, a day of mourning is being observed at Dhaka University for this incident.

It was then used as a television room in Jagannath Hall until the tragic events of October 15, 1975.

The roof of the old building collapsed that night in heavy rain, killing 40 people and injuring more than a hundred.

That night is still a tragedy for the teachers and students of that time.

According to eyewitness accounts of the day

Inside the TV room on the night of the incident was Swapan Kumar Dey, who is currently the president of the Jagannath Hall Employees Welfare Association. Swapan Kumar Dey, a teenager at the time, is now 51 years old.

His father was working as a gardener in Jagannath Hall, so his family lived inside the hall area.

He went inside the TV room to watch the popular drama 'Shukatara' on Bangladesh Television at 8.30 pm that night.

Swapan Kumar Dey thinks that there were about one and a half to two hundred people inside the room at that time. However, it is also mentioned that the number of people present in the newspapers and magazines published the next day and in the writings of various writers about that incident was three hundred to four hundred.

There was a depression in the Bay of Bengal in the south, and the effect was that the wind was blowing in Dhaka, accompanied by heavy rainfall.

"There were a lot of chairs lined up inside the hall. And there was a wooden stool next to the television in front of the chairs. I went and sat in that stool with several others," recalls Swapan Dey.

The accident happened within five minutes of the drama starting at 8.30 am.

"As the drama unfolded, I suddenly felt sand falling from the roof on my head. Before I knew it, I heard a loud noise and realized that I had been lifted into the air from two directions.

"After a while, I opened my eyes and saw I was standing behind the TV with a few others.

"Just before the roof collapsed, two students grabbed me from both sides and led me to the back of the television. Many of those who were sitting on the bench were able to take shelter at the last minute."

"After getting used to it, I could hear only 'Babare, Ma'go, Bachao' screams from the surroundings. I still didn't know if people had died in the accident or not. I ran out of there like crazy."

"I went out and told everyone one thing, 'The roof has collapsed.'"

Swapan Kumar Dey said that he was unwell for a long time even after returning to the spot after informing the people around him.

"I was young then. I couldn't keep my head straight in the blood, the death, the cries."

An investigation conducted by the university later said that the old and dilapidated building collapsed due to excess rain.

After the building collapsed, the whole building was demolished. Later, a new dormitory of Jagannath Hall called 'October Smriti Bhavan' was built at the same place.

October 15 has been celebrated as 'Dhaka University Mourning Day' since the year after the incident.