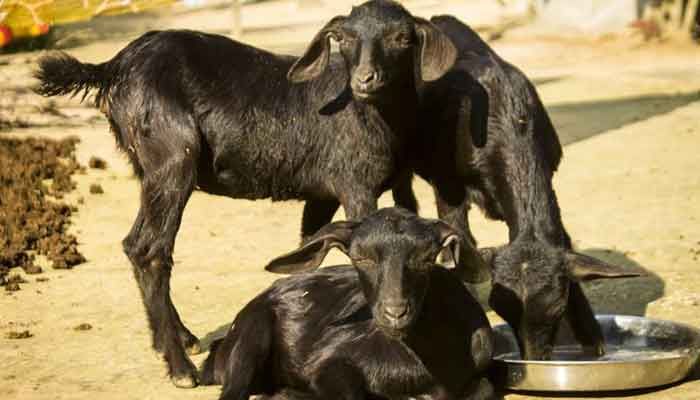 There are about 300 breeds of goats in the world at the moment, both naturally and artificially modified. Among these, the black goat of the local breed of Bangladesh or Black Bengal Goat is said to be one of the best breeds of goat.

Researchers and government officials say the recognition comes from research by organizations such as the FAO.

In 2007, the FAO conducted research on 100 breeds of goats in the world and recognized 'Black Bengal' as one of the best breeds in the world.

What are the features of Black Bengal Goat?

There are about 300 breeds of goats in the world, but they differ in size and characteristics.

In 2018, a team of Bangladeshi scientists unveiled the mystery of genome sequencing or full life of Black Bengal Goat.

M.A.M. Yahiya Khandaker, a professor in the Department of Animal Breeding and Genetics at Bangladesh Agricultural University, a member of the team, told the BBC that the goat's skin color was mainly black. It is short in shape, but the body structure is strong and muscular.

Its fur is shorter and its horns are shorter.

Black Bengal goats give birth twice in 14 months, at least two at a time, up to a maximum of 5 kids at a time. This goat gives less milk.

Apart from Bangladesh, it is found in West Bengal, Jharkhand, Assam and North Orissa. This breed is also found in Central and West Africa.

Black Bengal goats like to stay in clean, dry and high places.

Professor M.A.M. Yahya said, "Due to the fact that they have been living in this region for many years, the genetic characteristics of the Black Bengal goats have been adapted to the climate of Bangladesh, which is why they are the most numerous in Bangladesh."

Kushtia, Meherpur, Chuadanga and Jhenaidah districts of Bangladesh have the highest production of Black Bengal goats.

Where did the name Black Bengal Goat come from?

This goat of Black Bengal Goat breed is a unique species of Bangladesh. Researchers and government officials say the goat has been in the area since the beginning of animal husbandry.

However, locally these were known as desi black goats.

But the name 'Black Bengal Goat' has come up officially since animal husbandry researchers started researching this animal.

Later, when this species of Bangladesh became the subject of international research, it was called by this name.

Why is the Black Bengal Goat unique?

Noor Hasni Disha, a scientific officer at the Bangladesh Livestock Research Institute, said Black Bengal is famous mainly for its meat and skin.

"This breed of goat is said to be of excellent quality for its quality of meat and skin. It is also easy to keep and does not require a large space to keep."

In terms of numbers, Bangladesh ranks fourth in the world in goat production and fifth in goat meat production.

According to the Bangladesh Livestock Department, the country produces an average of 22 million goats every year, of which 95 percent is Black Bengal.

Most of them were slaughtered during the sacrifice of one of the largest religious festivals in Bangladesh.

Goats have not been imported in the last five years.

The skin of Black Bengal is also famous in the world. In the international market, goat skin is called both Goatskin and Kidskin.

Black Bengal goatskin is known in the world market as 'Kushtia Grade' and is valued.

Demand from farmers is increasing

In recent years, it has been seen that many entrepreneurs in the country are becoming enthusiastic about cattle rearing. Among them, Black Bengal Goat is in great demand. Photo: Collected|| Goat meat is in great demand in Bangladesh throughout the year.

"A big reason for this is that this breed of goat is easy to raise, and its mortality rate is low," said Noor Hasni Disha, a scientific officer at the Livestock Research Institute.

At present, there are about 50,000 goat farms in the country.

Barriers to the growth of the Black Bengal Goat

Even after being one of the best breeds of goats in the world, many times farmers do not want to produce this goat.

One of the reasons for this is that in areas where this breed of goat is abundant, many people blame this goat for desertification.

In addition, goat rearing was stopped for several years in at least 35 villages of Jhenaidah district due to the destruction of goat crop fields and the resulting regional clashes.

But there are problems beyond that.

Professor MAM Yahya said that in recent years, the quality of the genes of Black Bengal goats in the country has declined, especially the quality of fertility.

He said that the main reason for this is that the number of this variety in the country has decreased a lot. People do not want to observe Patha because of bad smell.

"As a result, even if goats are born as patha, they are castrated. Besides, there is no demand for patha meat in Bangladesh, which is why the number of pathas is low."

"Scientific research has shown that if the same text is the only source of breeding goats for several generations of the same family, that is, interbreeding, then the value of its genetic traits will not be the same as before."

At present, an average of 162 goats is bred in the country with one goat.

He thinks the solution is to take artificial insemination further.

The Livestock Research Institute in Bangladesh started research on artificial insemination in the year 2000.

The improved varieties produced in the laboratory from here are given to the farmers, but the number is much less than required.

*The writer works at BBC Bangla