Tensions between Iran and South Korea over Seizure of Oil Tanker 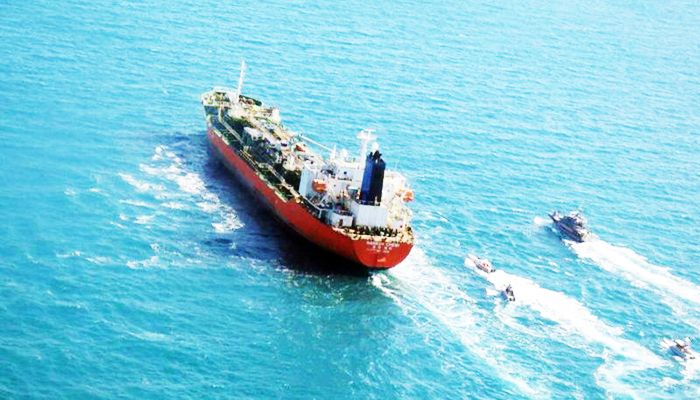 The seizure of a South Korean oil tanker in the Strait of Hormuz by Iran's Revolutionary Guards has created a heated situation between the two countries.

Korean authorities demanded the immediate release of the ship. Several media outlets quoted a statement from the country's foreign ministry as saying that a delegation of South Korean military personnel deployed in the Strait of Hormuz had traveled to Iran to discuss the issue.

Iran's Revolutionary Guards say they detained the Hancock Chemi, a ship with 20 crew members, off the coast of Oman on Monday on charges of violating environmental laws. They say the ship's "chemicals were polluting the waters of the Persian Gulf."

However, South Korea has denied the allegations.

The ship is being held in the Iranian port city of Bandar Abbas. The 20 crew members aboard the Hancock Chemi ship are nationals of South Korea, Indonesia, Myanmar and Vietnam.

South Korea has said it does not want any military action. Foreign Ministry spokesman Choi Yang-sam told reporters that they were interested in resolving the issue through bilateral diplomatic means.

The shipwreck comes amid tensions in Iran over লার 800 million in US bank sanctions over a US embargo on Iran.

"We have to check all the information first and ensure the safety of the sailors on our ship," he told reporters. "We have begun diplomatic efforts for the speedy release of the ship."

South Korea's defense ministry said on Tuesday that its destroyer ship, carrying members of its anti-piracy unit, had reached the Strait of Hormuz, with the aim of "ensuring the safety" of South Korean citizens.

The oil tanker was intercepted very close to the narrow sea lane where the destroyer was located. It is a very important shipping lane in the Gulf region.

According to the Yonhap news agency, the South Korean destroyer has been stationed off the coast of Somalia since last year to repel pirate attacks in the Gulf of Aden and the Strait of Hormuz.

This is the first major shipwreck in Iran in more than a year.

A spokesman for Iran's foreign ministry said in a statement that the oil tanker had been detained "because of a technical issue and because it was causing pollution at sea."

The shipping company said the allegations of sea pollution were untrue. Citing the ship's owner, the media reported that members of Iran's Revolutionary Guards abruptly boarded the ship and forced it to change course.

The Iranian government has rejected a proposal by Iran to "hostage" the ship in order to recover their funds from South Korea.

"We are accustomed to hearing such allegations ... If the question of hostages is raised, then the Korean government has done it. The তারা 600 million they have withheld is our money," Ali Rabie told reporters at a news conference.

The Strait of Hormuz

Although small, the Strait of Hormuz is one of the most important shipping lanes in the world.

The narrowest part of the system is 96 miles long and only 21 miles wide. There are only two ships that can navigate through an area that is only two miles wide.

It is bordered by Iran to the north, Oman and the United Arab Emirates to the south, and connects the Gulf to the Arabian Sea.

This method is very deep and very suitable for the movement of the world's largest crude oil tankers.

One-fifth of the world's oil, or 21 million barrels per day, was transported by the Hormuz last year. It is the busiest sea route in the world for oil transportation.

This approach is very important for the major oil exporting countries in the Gulf region, especially those whose economies depend on oil and gas production. Iran is very dependent on this sea route for its oil exports.

However, the use of the Hormuz system has become particularly important in recent years for Asia's largest economies.

China, Japan, South Korea and India were the largest exporters of oil through the Strait of Hormuz in 2016. The United States also imports about 1.4 million barrels of oil per day.

According to UN rules, the two countries that have the most control over shipping through the narrowest part of the system are Iran and Oman.