The New Term of Anxiety Is Tangail 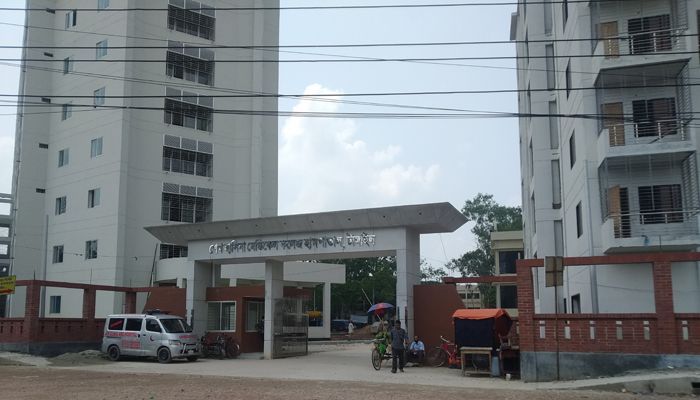 In Tangail district the number of patients is increasing rapidly || Photo: Collected

Tangail has long been identified as a high-risk area due to the alarming rise in coronavirus infections. The situation is getting worse day by day.

The perception that the rate of infection is higher only in the border areas is also changing. In Tangail district the number of patients is increasing rapidly. The death march is long. There is panic everywhere. Doctors are struggling to cope with the patient's stress in the hospital. Many are taking treatment on the floor without getting a bed. The hospital authorities said that this condition has arisen due to having more patients than the capacity. Medical activities are being disrupted due to a lack of necessary equipment in the hospital.

Seven people have died at Tangail General Hospital in the last 24 hours with corona and corona symptoms. At that time, 235 people have been identified as Corona positive in the district. The detection rate is 44.67 percent, said the District Civil Surgeon's Office Source on Friday (July 2).

According to district health department sources, 235 people have been found Corona positive by examining samples of 526 people in the last 24 hours. The total number of victims in the district so far is 8,199. So far 118 people have died. Nazrul Islam, chairman of Dighailkandi Union Parishad in Ghatail Upazila, died of corona on Friday (June 18).

Tangail General Hospital Residential Medical Officer (RMO) Shafiqul Islam said the number of patients was increasing day by day. Patients are admitted to all the six beds of the Intensive Care Unit (ICU) of the hospital. So if any new patient needs ICU service, they are being transferred to Dhaka.

In Tangail, 37.1% of the total cases of coronavirus were infected in June. In June, 29.56 percent of the total deaths were due to Corona infection. RMO Shafiqul Islam said more than 100 people had died with Corona symptoms at Tangail General Hospital.

According to district health department sources, the first corona patient was identified in the district on April 8 last year. After that, the number of victims in the 14 months till May 31 stood at 5,016. The number of infected people continues to rise abnormally in June. From June 12 to 30, the district's infection rate was over 32 percent. In June, 2,948 people were infected. Since the onset of corona, 118 people have died in 14 months. Of them, 34 people died last June. In other words, the number of infections in this district has exceeded eight thousand.

Strict restrictions are in place throughout the week to prevent corona infections.

Tangail Sadar Police Officer-in-Charge (OC) Mir Mosharraf Hossain said 13 checkpoints and 5 mobile teams were working to implement the lockdown in Tangail town. Legal action is being taken through the mobile court in case of non-compliance with government instructions.

Civil Surgeon Abul Fazal said. Sahab Uddin Khan said, it is not possible to leave the house without urgent need. Everyone must adhere to hygiene and social distance to curb corona influx.

Last Thursday (July 1), he wrote on his Facebook wall, "I urge the wealthy people and people's representatives of Tangail district to form a fund to provide at least 25 high-flow oxygen nasal cannula to our 250-bed General Hospital in Tangail in the current dire situation of this corona epidemic."  So that we can cooperate in the treatment of corona patients more smoothly. '

Topic : Others rise in coronavirus infections