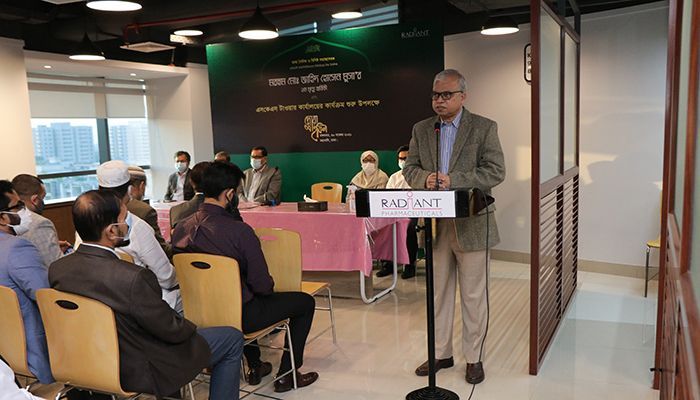 ﻿A prayer mahfil was held on the occasion of the first death anniversary of language activist Zahed Hossain Musa Mia, a consultant of Radiant Pharmaceuticals Limited, and the relocation of the company's head office to SKS Tower. Radiant Chairman Md Nasser Shahriar Zahedee was the chief guest at the prayer mahfil held at SKS Tower in Mohakhali on November 30 at 4 pm.

Speaking as the chief guest, Md Nasser Shahriar Zahedee recalled his father and said that as the eldest child of Zahed Hossain Musa Mia, he had always got the opportunity to see his father up close. He was free from covetousness. He lived a simple life. He used to guide me on various issues. Following his guidance and advice, Radiant has come to this position today.

He further said that the late Musa Mia was a very kindhearted person. He cared for all the members of the Radiant. In particular, he advised Radiant staff so that consumers would get the highest quality medicines at reasonable prices. Regarding the new office, the Radiant Chairman said that from now on, the activities of Radiant's head office will be conducted in SKS Tower. Hopefully, by the grace of Allah, we will be able to work here in a beautiful environment with new enthusiasm.