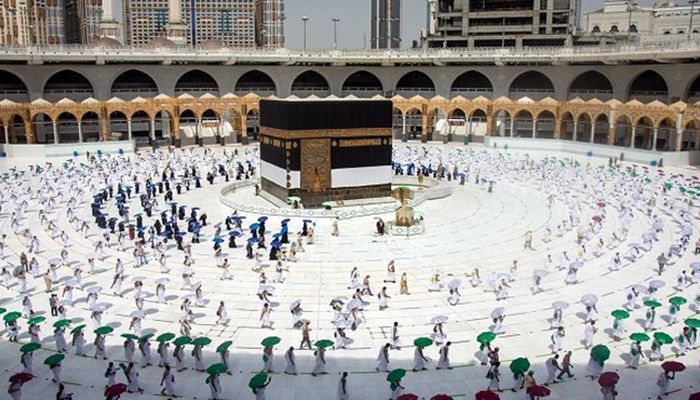 Pilgrims were performing hajj during the pandemic || Photo: Collected

﻿The cost of packages for performing hajj under both public and private management has increased further by Tk 59,000.

The cost has been increased for the Bangladeshi pilgrims in line with Saudi Arabia’s decision, said State Minister for Religious Affairs Md Faridul Haque Khan while talking to reporters at the Secretariat on Thursday.

Saudi Arabia has increased Muallem fees to 8,640 and 7,490 Riyals in C and D categories respectively.

With this increased cost, pilgrims will have to spend minimum  TK 5,21,150 to perform hajj this year.

Besides, the minimum cost under private management was fixed at Tk 4,56,530 and the increased cost also will be added under this package.

Flights carrying Bangladeshi pilgrims to Saudi Arabia to perform Hajj will begin on May 31, said the Civil Aviation and Tourism Ministry.

This year, the government has fixed Tk 1.40 lakh as plane fare.

Biman will carry 31,000 pilgrims through 75 dedicated flights, said State Minister for Civil Aviation and Tourism Md Mahbub Ali while talking to reporters after attending a meeting on hajj management at the secretariat on April 27.

This year, a total of 57,856 pilgrims will be able to perform Hajj from Bangladesh.

Earlier, Saudi Arabia raised the number of Hajj pilgrims from inside and outside the kingdom to one million in 2022, authorities announced in a statement on April 9.

Hajj is open to those who have been fully vaccinated against COVID-19 and are under the age of 65, added the statement.

Pilgrims travelling from abroad will also need to have a negative PCR test taken no more than 72 hours before their departure for Saudi Arabia, the statement added.

Last year, 58,745 pilgrims performed Hajj in the world because of the COVID-19 pandemic.

Before the pandemic, some 2.5 million people used to travel every year to Saudi Arabia for Hajj._UNB