Made in Bangladesh refrigerators dominate market 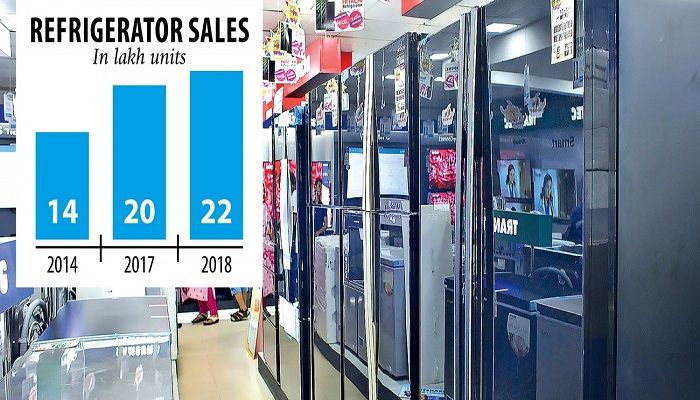 ﻿Just a decade ago Bangladesh was almost fully dependent on import to meet its demand for refrigerators. But the situation has reversed, with about 80 percent of the demand now met by locally-manufactured ones.

Walton has shown the path by setting up a manufacturing plant in 2008, and in 2016 has even started manufacturing compressors, the vital component of refrigerators.

Transcom, Minister, Vision, Jamuna, Singer Bangladesh, and Samsung have joined Walton: they are either manufacturing or assembling refrigerators locally. Higher electricity generation has also helped the sector to grow fast.

In 2018, refrigerator sales were about 22 lakh units, up 10 percent year-on-year, according to industry players.

The sector has been growing at double-digit for the last five years, they said.

To cash in on the rising demand, Butterfly Marketing, the local distributor of Korean LG, has announced plans to manufacture LG’s refrigerators in Bangladesh with a view to providing quality products at a reasonable price.

“The manufacturing facilities are ready and we will go for trial production by this month,” said M Tanvirul Alam, head of factory operations of Butterfly.

Butterfly has invested $55 million, which is equivalent to Tk 460 crore, to set up the facilities.

Initially, 700 units of six models will be manufactured per day against the capacity of 1,400 units, he said.

Transcom Electronics started to assemble refrigerators in 2014 and have a plan to go for full-fledged manufacturing from next year, said Saikat Azad, head of marketing of Transcom Digital.

Vision Electronics, a sister concern of Pran-RFL Group, has also been manufacturing 75 models of refrigerators at its factory in Palash upazila, Narsingdi, established in 2016.

Another Korean electronics giant Samsung partnered with Fair Electronics to establish a manufacturing plant in Narsingdi in 2018. The plant has manufacturing capacity of 400,000 units per year.

The South Korean firm is providing technological help to manufacture the products.

Japanese brands are not yet interested in setting up manufacturing plants in Bangladesh as the market size is not big enough for them.