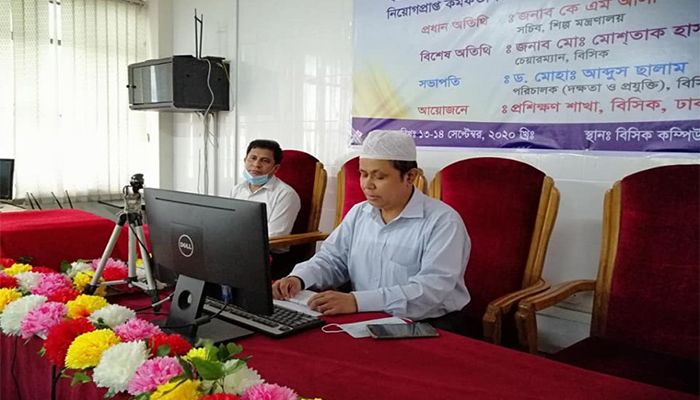 ﻿The Government will set up 50 more industrial parks on 20,000 acres of land to create jobs for five million people by 2030, said Minister of Industries Nurul Majid Mahmud Humayun on Thursday.

"BSCIC will have to provide fast, easy and cost-effective real-estate services to entrepreneurs from its 76 industrial estates," he said, opening a virtual workshop for BSCIC officials on the innovation of civic services organised by BSCIC.

One-Stop Business Act, 2018 provides for Bangladesh Small and Cottage Industries Corporation (BSCIC) to provide the services it needs for its service-seekers / entrepreneurs, he mentioned.

Due to the pandemic, the Minister said, an opportunity has been generated to move labour-intensive industries to Bangladesh.

He also called on them to keep up with the current speed of development by displaying their utmost integrity and sincerity.

The Minister of Industry directed the BSCIC officials to plan their activities for the development of an online marketing platform and to help with the implementation of Prime Minister Sheik Hasina-declared stimulus package for affected entrepreneurs in the manufacturing, service and SMMC sectors, etc.

In cooperation with BSCIC, he said, thousands of small industries have been set up in rural areas of the country, which contributes a great deal to boosting the country's economic development.

The BSCIC authorities have sustained production following the government health guidelines in the midst of the pandemic, the Minister stated.

Father Bangabandhu Sheikh Mujibur Rahman played a significant role in the establishment of the BSCIC.

It (BSCIC) has worked to create employment for millions of unemployed youth in the country.

Director of BSCIC Dr. Md Abdus Salam chaired the workshop, while its chairman Md Mostaq Hassan, ndc, and district officials and members of the board of directors of BSCIC took part in the virtual workshop.