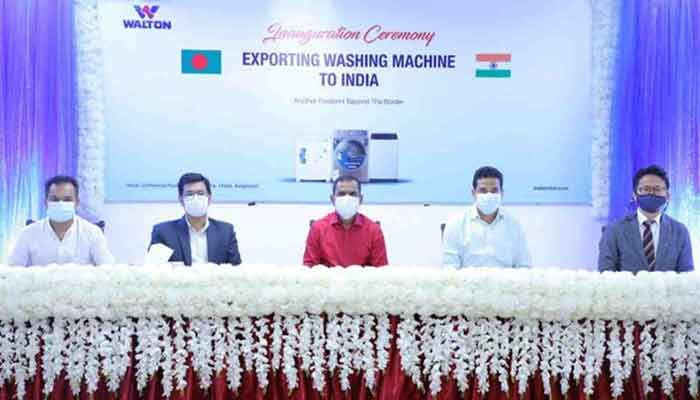 ﻿Bangladeshi electronics giant Walton has achieved another landmark in its export business and has begun to export locally manufactured washing machines to India.

With this, Walton has added one more thing to its current exports to the neighboring county, including a refrigerator, air conditioner, television and some other home appliances, said a press release.

The ‘Made in Bangladesh’ tagged Walton made products will be sold in Indian market.

Walton is going to ship out the first consignment of washing machine to India on November 15.

The announcement was made at an inauguration ceremony titled ‘Exporting Washing Machine to India’ held at Walton Corporate Office in the capital on Wednesday.

Thus it would be a promising market for Walton as well as Bangladesh. By next year, he noted, Walton planned to export at least 100k units of washing machines to India.

Walton authorities said, the production and marketing of international standard washing machines with advanced features at reasonable prices have resulted in the growing demands at domestic and international markets.

In the last five months (June to October), the sales of Walton washing machine were swelled up by about 80 percent compared to the previous year’s corresponding period. In the same period, washing machine exports have also increased. Along with the Indian market, Walton is exporting washing machines to Nepal, Yemen, East Timor and some other countries.

Walton’s Washing Machine R&D (Research and Development) Head Moniruzzaman Karjon said that since 2017, they have been manufacturing international standard washing machine with advanced technologies in line with the buyers’ choice, demand, purchasing capacity as well as suitability of weather.

Walton’s washing machine manufacturing unit is equipped with international standard R&D department as well as testing lab with cutting-edge technologies and pieces of machinery, he added.

A team of very talented and skilled engineers are engaged in conducting regular research on innovative designs, latest technologies and features, and also improving the product’s quality, he noted.

And thus, customers are getting the best quality products at competitively reasonable prices, he added.

Walton is manufacturing and marketing 14 models of different capacities, ranging from 6 to 12.5 kg, energy-efficient semi-automatic and automatic washing machines with top and front-loading functions that are priced between Tk 6,900 and Tk 48,000.

Walton is providing up to 10 years guaranty for main parts (motor) of its washing machine, along with five year home service as well as one year free after sales service.