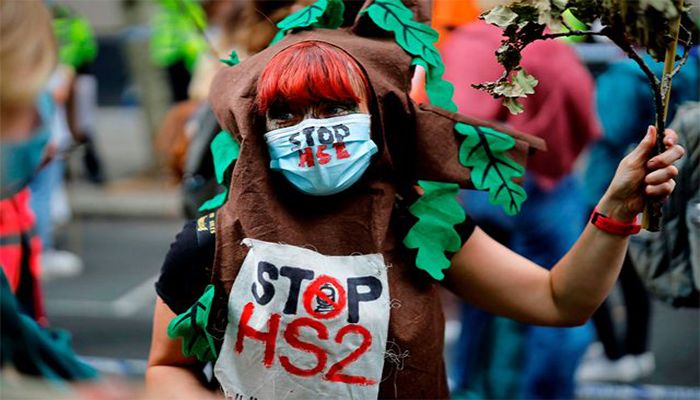 ﻿Climate change protesters in Britain blocked two newspaper printing sites early on Saturday, preventing the distribution of titles including The Times, The Daily Telegraph and The Sun.

Activist group Extinction Rebellion (XR) said it targeted both the plants, just north of London and near Liverpool in northwest England, “to expose the failure of these corporations to accurately report on the climate and ecological emergency”.

Dozens of protesters gathered at the site late Friday and used cars and other barriers to block roads outside, with the police making 13 arrests overnight, reports AFP.

In a statement, XR confirmed that it was aimed at undermining the newspapers that are part of the News Corp., owned by Rupert Ferguson 's family, as well as the right-wing titles The Daily Mail and The London Evening Standard.

“The groups are using disruption and their consistent manipulation of the truth to suit their own personal and political agendas,” it added.

Newsprinters, the company that owns and maintains the presses, said that printing had been moved to other sites and apologised to customers for late delivery.

“This attack on all of the free press impacted many workers going about their jobs,” a spokeswoman said.

“Overnight print workers, delivery drivers, wholesale workers and retail newsagents have faced delays and financial penalty,” she added, noting it was “a matter for the police” and government.

The Times apologised to readers who were unable to purchase the newspaper and said on Twitter that it was "working to have the newspapers distributed to retailers as soon as possible."

“This morning people across the country will be prevented from reading their newspaper because of the actions of Extinction Rebellion,” she said on Twitter.

“This attack on our free press, society and democracy is completely unacceptable.”

XR initiated 10 days of renewed protests around the country on Tuesday, hitting Westminster and many other locations so far this week.

Police have taken a stricter approach to the party as it staged its third big wave of UK protests in a year, enforcing site limits and making hundreds of arrests.

Last year, more than 1,700 people were arrested during its 10-day “Autumn Uprising”, which saw major disruption across the UK and large parts of central London blocked off.