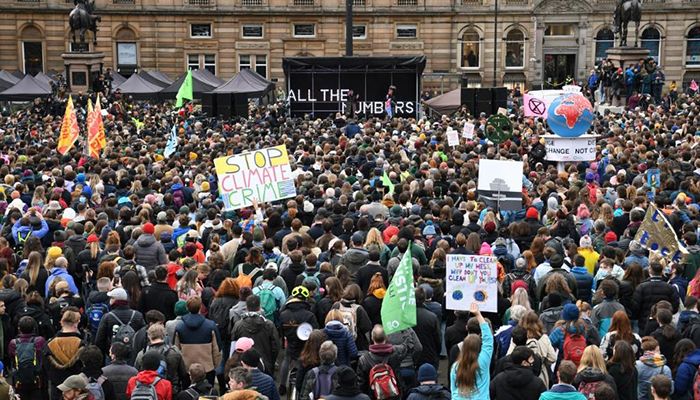 ﻿Tens of thousands of protesters braved rain and wind in Glasgow Saturday as part of worldwide demonstrations against what campaigners say is a failure of crunch UN climate talks to act fast enough to tame global warming, reports AFP.

Dozens of events were planned worldwide to demand cuts in fossil fuel use and immediate help for communities already affected by climate change, particularly in poorer countries.

In Glasgow, police earlier said they expected up to 50,000 people to parade through the streets. Organizers later claimed more than 100,000 had turned out.

Demonstrators marched close to the COP26 summit venue and through the centre of the Scottish city on Saturday in a colorful protest with music and dancing.

"No more coal! No more oil! Keep our carbon in the soil!" chanted protesters.

Some carried placards calling for "Climate Justice" and a "Fair COP" as they made their way to a park on the edge of the city in the afternoon.

"We need the biggest emitters to be held responsible," Kathy Jetnil-Kijiner, from the Marshall Islands, told the crowd.

"We did nothing to contribute to this crisis, and we should not have to pay the consequences."