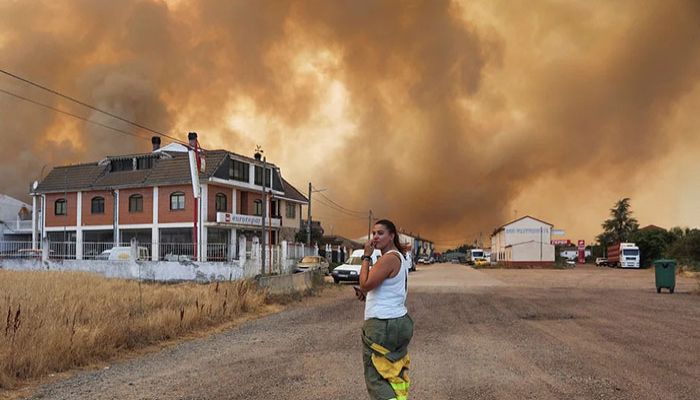 A firefighter from the Brigadas de Refuerzo en Incendios Forestales (BRIF) reacts as the fire reaches near Tabara, Zamora, on the second heatwave of the year, in Spain, 18 July, 2022 || Photo: Reuters

"Heat kills. Over the past decades, hundreds of thousands of people have died as a result of extreme heat during extended heatwaves, often with simultaneous wildfires," WHO regional director for Europe Hans Kluge said in a statement.

"This year, we have already witnessed more than 1,700 needless deaths in the present heatwave in Spain and Portugal alone," Kluge added.

The regional director stressed that exposure to extreme heat "often exacerbates pre-existing health conditions" and noted that "individuals at either end of life's spectrum - infants and children, and older people - are at particular risk".

Responding to a query by AFP, WHO Europe explained that the figure is a preliminary estimate based on reports by national authorities, and that the toll had "already increased and will increase further over the coming days".

The true number of deaths linked to the heatwave won't be known for weeks, he said, adding "this scorching summer season is barely halfway done".

The regional head of the UN health body said governments need to demonstrate will and leadership in implementing the Paris Agreement, which set the goal of limiting end-of-century warming to two degrees Celsius (3.6 degrees Fahrenheit) above pre-industrial levels -- and preferably not beyond 1.5C.

He said that members of the WHO's European region -- 53 countries and regions including several in Central Asia -- "have already demonstrated that they can work together on urgent threats to global health," and that it was "time for us to do so again."