Wildfires Spread, Fish Die Off amid Severe Drought in Europe 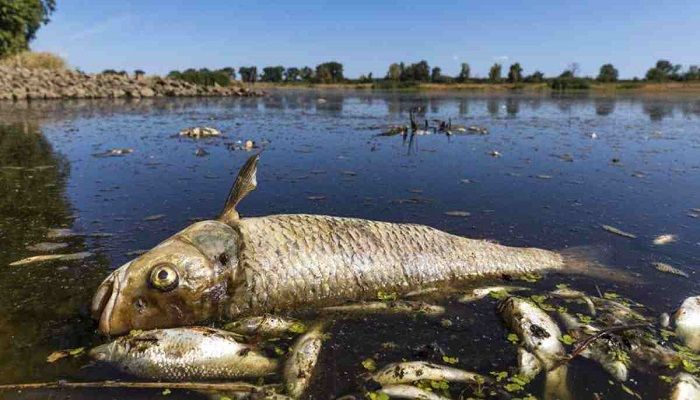 A dead chub and other dead fish are swimming in the Oder River near Brieskow-Finkenheerd, eastern Germany, Thursday, Aug. 11, 2022 || Photo: AP

﻿Firefighters from across Europe struggled Thursday to contain a huge wildfire in France that has swept through a large swath of pine forest, while Germans and Poles faced a mass fish die-off in a river flowing between their countries.

Europe is suffering under a severe heat wave and drought that has produced tragic consequences for farmers and ecosystems already under threat from climate change and pollution.

The drought is causing a loss of agricultural products and other food at a time when supply shortages and Russia’s war against Ukraine have caused inflation to spike.

In France, which is enduring its worst drought on record, flames raged through pine forests overnight, illuminating the sky with an intense orange light in the Gironde region, which was already ravaged by flames last month, and in neighboring Landes. More than 68 square kilometers (26 square miles) have burned since Tuesday.

The French wildfires have already forced the evacuation of about 10,000 people and destroyed at least 16 houses.

Along the Oder River, which flows from Czechia north into the Baltic Sea, volunteers have been collecting dead fish that have washed ashore in Poland and Germany.

Piotr Nieznanski, the conservation policy director at WWF Poland, said it appears that a toxic chemical was released into the water by an industry and the low water levels caused by the drought has made conditions far more dangerous for the fish.

“A tragic event is happening along the Oder River, an international river, and there is no transparent information about what is going on,” he said, calling on government authorities to investigate.

People living along the river have been warned not to swim in the water or even touch it.

Poland’s state water management body said the drought and high temperatures can cause even small amounts of pollution to lead to an ecological disaster but it has not identified the source of the pollution.

In northern Serbia, the dry bed of the Conopljankso reservoir is now littered with dead fish that were unable to survive the drought.

The water level along Germany’s Rhine River was at risk of falling so low that it could become difficult to transport goods — including critical energy items like coal and gasoline._AP