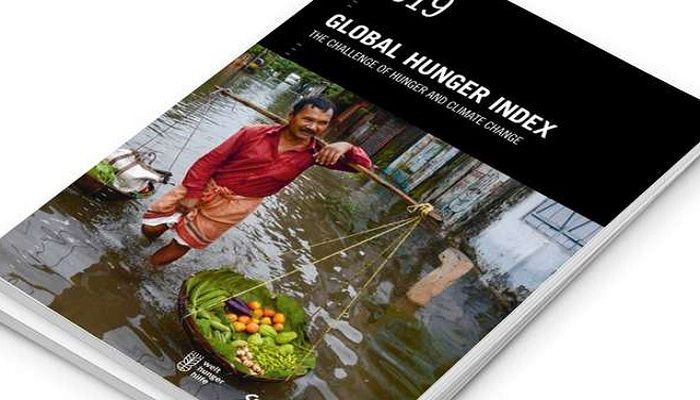 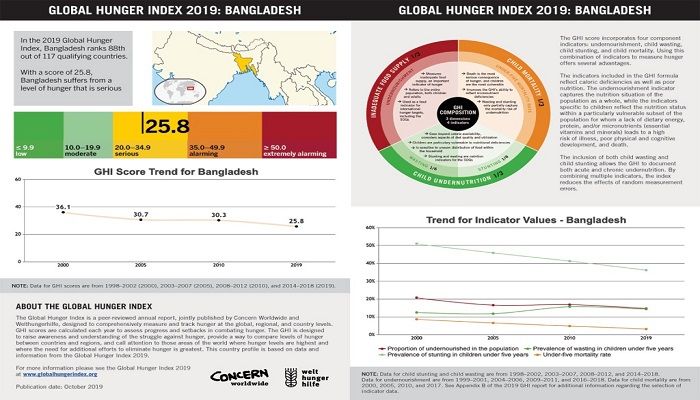 ﻿Bangladesh ranks 88th out of 117 qualifying countries on the latest Global Hunger Index, much ahead of India.

Bangladesh reduced hunger significantly, but with a score of 25.8, the country still suffers from a level of hunger that is serious, according to the 2019 report. Its previous score was 30.3 in 2010.

A high GHI score can be evidence of a lack of food, a poor-quality diet, inadequate child care-giving practices, an unhealthy environment, or all of these factors. The GHI ranks countries on a 100-point scale, with 0 being the best score (which means no hunger) and 100 the worst.

Concern Worldwide and Welthungerhilfe that share a mission to eradicate hunger jointly produce the GHI every year to track hunger levels around the world.

India’s child wasting rate is extremely high at 20.8 percent, the highest wasting rate of any country in this report for which data or estimates were available.

Outside India, two countries in South Asia have made significant advances in child nutrition, and their experiences are instructive, the report said.

A 2015 study sought to identify the reasons behind the decline in stunting in Bangladesh at the national level from 58.5 percent in 1997 to 40.2 percent in 2011

The authors conclude that success in this area can be achieved with robust economic growth and attention to “nutrition-sensitive” sectors such as education, sanitation, and health.

Nepal’s remarkable reduction in child stunting from 56.6 percent in 2001 to 40.1 percent in 2011 is associated with, and likely attributable to, increased household assets (a proxy for household wealth), increased maternal education, improved sanitation, and implementation and use of health and nutrition programs.