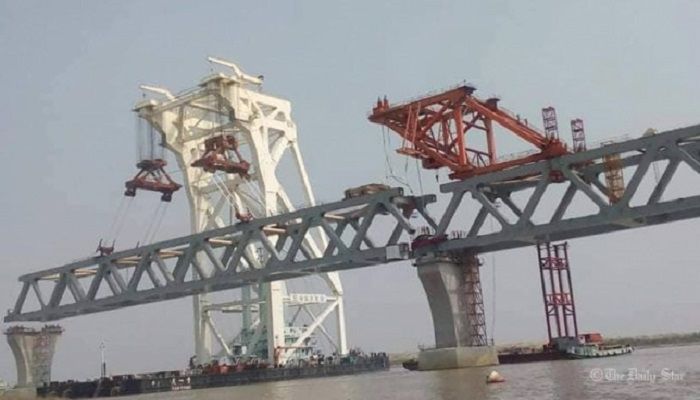 With the installation of 15th span this morning, a total 2.25 kilometres of Padma Bridge is now visible- Photo: Collected

A total of 2.25 kilometers of Padma Bridge is now visible as its 15th span was installed at the Jajira side of Madaripur district today morning.

Due to rainy season and lack of navigability, no span could be installed for the last three months.

The span was installed successfully this morning after carrying out constant dredging, said the engineers.

Besides, five more spans are ready to be installed and four of those are expected to be placed within this year, they added.

Of the total 41 spans, 31 spans have already reached to the construction sites from China.

Building of 2,891 slabs for railway have been completed while rest 68 are being constructed.

The construction work of the long-cherished Padma Bridge started in December, 2015 and the first span (superstructure) among the 41 was installed on September 30, 2017.

The length of the steel structure double-deck Padma bridge is 6.15 kilometres. The trains will run through the lower deck while the road will be on the upper level of the bridge.

The capital will be directly connected with 21 southern districts through road and railways after the successful construction of the Padma bridge.

The construction of main Padma Bridge is going by China company Major Bridge Engineering Co Ltd while the works of river training is going on by Sino Hydro Corporation of the same country.