Why Are Lightning Strikes Escalating? 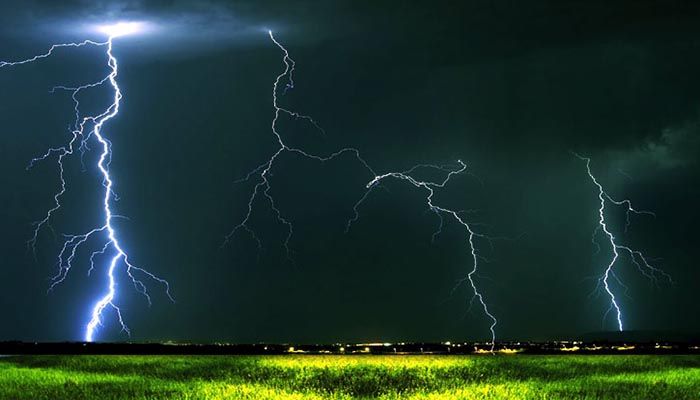 Bangladesh is a densely populated and disaster-prone area and the risk of damage due to lightning is always high. || Photo: Collected

﻿Though, there are many types of natural disasters on earth. Some of them can be predicted before happening but some are not. One such unexpected natural disaster is lightning. It may happen within a very short time and you couldn’t imagine the disastrous impact of lightning. Suddenly there was a thick layer of black clouds all around the sky. It seems that the evening will come within a very short period! But no, all of a sudden there was a flash of light and thunder. It sounds like when a bomb explodes. Bangladesh is a densely populated and disaster-prone area and the risk of damage due to lightning is always high. Over the past few years, the death toll from lightning has risen alarmingly. As the death and injury rate continues to rise, as a result, the Bangladesh government declared lightning as a natural disaster in 2016. Ever since it was declared a natural disaster, the death toll from sudden lightning strikes in Bangladesh has been escalating. In 2021 the lightning has become very common.

From the above information, it can be said with certainty that lightning has emerged as one of the most common natural disasters in Bangladesh. But the question is why such upward lightning? Why is the number of deaths due to lightning increasing every year? We have to look back a little to find the answer. If we go back to the time around 2000, we can see that there were a lot of tall trees in every part of the country, especially palm trees, coconut trees, and other tall trees. Which acted as lightning insulators. But over time, due to indiscriminate deforestation and severe injustice to the environment, Bangladesh's forest cover has decreased a lot. In earlier days, palm trees, coconut trees, and other tall trees could be seen in large numbers in the fields and along the road. But nowadays it is difficult to find palm trees. We are cutting down the trees that were very old and making furniture in the house or using the wood as a means of burning bricks and at the same time endangering our own lives. And in this way, the number of trees is constantly decreasing. As the number of trees decreases, the risk of lightning increases.

Incredibly, when the British ruled the country, they realized that it was a thunderstorm-prone area. So they planted lightning rods in the empty fields of this region. But it is our (Bengal people) nature to take possession of anything as soon as we get it. Due to this nature, many people in this country have taken possession of these lightning rods from the ground. As a result, the risk of lightning has increased manifold.

One of the reasons for the increase in lightning is air pollution. The air quality in the country is constantly deteriorating. Even Dhaka city is one of the most polluted air cities in the world. Polluted air is raising the temperature of the environment which is the ideal environment for creating thunderstorms. And this environment is suitable for creating lightning. Also, the rate of lightning has increased comparatively much more than in the past years due to the impact of climate change.

There is a lack of awareness among the people of our country. They do not want to be easily persuaded to explain something to a person until he has experienced the horrors of the disaster. Due to such unawareness, innocent people of the village are being severely damaged due to being exposed to the field during lightning strikes and many are even dying. Many children go to play football during the rain and in some cases, they also die only due to unconsciousness.

So the time has come to adopt sustainable management to prevent lightning. I think it will be possible to prevent lightning if three important guidelines are implemented. Firstly, the country needs to take steps to plant palm trees, coconut trees, and other tall trees. These trees should be officially planted in the areas known as lightning hot spots. After planting the trees, they have to be maintained regularly by the appropriate authorities. As a result, the trees will grow very fast and will help prevent lightning. In addition, encouragement should be given to the locals so that they all plant at least palm and coconut trees. If this can be done, I think it is possible to build resistance against lightning in a coordinated manner.

Third, there is a need to create awareness among the mass people about the dangers of lightning. To make everyone aware of the do's and don'ts of lightning through radio, television, newspapers, and social gatherings. So that everyone can be in a safe place. By doing so, we will be able to reduce the number of deaths in most cases.