Asian Shares Near 6-Week Highs, Eyes on Fed, US GDP 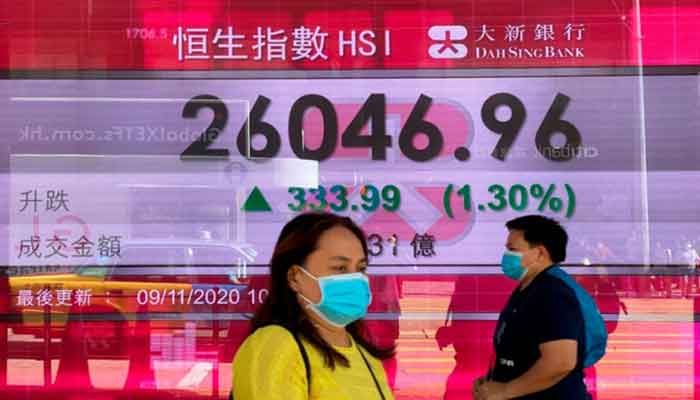 ﻿Asian stocks rose for a third straight session on Monday as risk appetite was aided by recent data showing the world economic recovery from the coronavirus pandemic was well on track while the US dollar loitered near two-month lows.

The index has had a strong run lately as it clocked its second consecutive weekly rise on Friday and was on track for another month of gains. Since April 2020, the index has offered positive returns in all but three months.

Japan's Nikkei (.N225) was down 0.3% while Australia's benchmark share index (.AXJO) was off a shade too with a public holiday in five of the country's eight states and territories.

Risk appetite was whetted by early April manufacturing activity indicators out last week, which pointed to a robust start to the second-quarter with data hitting record highs in the United States and signalling an end to Europe's double dip recession.

Investors embraced the strong data, shrugging off earlier concerns about potential higher US taxes on capital gains under the Biden administration.

E-mini futures for the S&P 500 were slightly weaker in early Asian trading on Monday.

First-quarter US gross domestic product data is due later in the week with expectations activity will have likely returned to pre-pandemic levels.

"We estimate that the economy will close the output gap and rise above potential in the second half of this year," ANZ economists wrote in a morning note, suggesting more upside for shares.

Europe "cannot match this, but as 2021 progresses into 2022, the growth differential to the US will narrow."

That said, some economists say the market could hit a soft patch in coming months reflecting concerns ranging from rising COVID-19 cases and worries that most of the benefits from massive fiscal stimulus have already been priced in. read more

"Stated differently, this may be the last quarter where companies can avoid being penalized for not seeing revenue recover quickly and/or not giving guidance," JPMorgan analysts wrote in a note.

They said the "bull case" for equities would be supported by reopening from coronavirus lockdowns, consumer spending and corporate earnings combined with reduced market volatility

The "bear case", on the other hand, would be triggered by inflation, delays to re-opening, weaker economic growth and corporate profits and a commodity recession.

Strong recent data meant bonds were sold off, though 10-year US Treasury yields were not far from a recent six-week low on expectations the US Federal Reserve will stay accommodative at its meeting this week.

In currencies, Turkey's lira edged lower adding to a recent slide and nearing an all-time low as a chill settled on relations with the United States and after the new central bank chief signalled that rate hikes would harm the economy.