These Are the World’s Richest Families 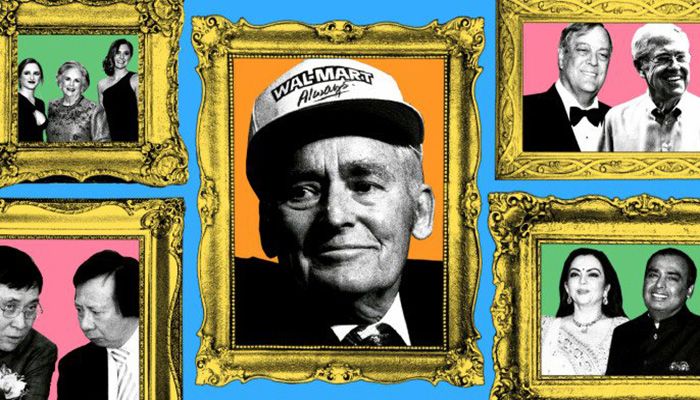 Scarcely a day goes by without a stock sale hitting the market: $99 million one day, $146 million the next, almost $294 million last week alone.

The discrete offerings, frequently by Goldman Sachs Group Inc., are on behalf of the Waltons, the world's richest family. In the past seven months they've liquidated $6 billion of Walmart Inc. stock — an amount more than double the value of special bonuses Walmart paid its 1.5 million US workers last year for recognition of their contributions during Covid.

And yet, it's barely made a dent in their holdings. The descendants of Sam Walton still control 1,334,480,250 shares of Walmart directly and through family trusts, while their fortune, largely tied to their stake in the world's largest retailer, has increased by $23 billion over the past year because of the rising stock price.

Walmart's success has kept the family from Arkansas — now in its third generation — wealthier than Jeff Bezos and Elon Musk, the two mega-billionaires of our era, and almost $100 billion ahead of the world's second-richest dynasty, the Mars clan, according to the Bloomberg Billionaires Index.

The two families were among the biggest winners in the past year as governments and central banks flooded economies with cash, fueling a boom in e-commerce, comfort food and spending on pets. But they were far from alone. As the pandemic reshaped the way we live and work, the 25 wealthiest families on the planet added $312 billion to their collective fortunes, a 22% gain since last August.

"It's been the perfect storm for dynastic wealth accumulation," said Bob Lord, an Arizona-based tax attorney and consultant for Americans for Tax Fairness.

Those ranked on the Bloomberg list represent multiple industries and geographies. The Johnsons of Boston-based Fidelity Investments were lifted by the surge in online trading. Asia's richest family, the Ambanis, benefited from a pivot to green and digital, while the world's biggest luxury fortunes, whose futures looked fraught at the depths of the health crisis, rose most of all. The family behind Paris-based Hermes soared 75% to $112 billion. The Lauders of Estee Lauder debuted on the ranking.

The list excludes first-generation billionaires and isn't definitive — some families' fortunes, such as the Rockefellers', are so diffuse it's hard to track their assets.

Lord doesn't see much of a surprise in the gains given years of policies designed to benefit the very top echelons of wealth. At the heart of that is tax policy that's permitted the 0.001% to pay "absurdly" low income tax rates, allowed for giant loopholes in inheritance taxes and enabled a steady decline in corporate rates, he said.

Backlash against widening inequality isn't new. But as the pandemic deepened the gulf, it's triggered a cascade of efforts from Beijing to Washington to tax the uber-rich, targeting big companies, investment income and inherited wealth.

In the US, President Biden and congressional Democrats have proposed a variety of ways to target the rich, including higher capital gains and income tax rates and new rules that would make it difficult to pass on assets to heirs tax-free.

That's already spurring families to take action. The Mills family of Chicago sold Medline, their medical business, to private equity firms for more than $30 billion, in part to get ahead of more punitive rates as well as provide liquidity to family members. A Walmart spokesman said the Waltons' disposals are part of an effort to keep the family's ownership percentage stable amid stock buybacks, and wouldn't say whether taxes are a motivation. Some of the proceeds will work their way to the family's philanthropic foundation.

Also, it's not clear that the Democrats will achieve their objectives in a fiercely divided congress. Some of America's richest families — the Kochs in particular — have been on the frontline of defending tax breaks for decades, lobbying for provisions they currently enjoy. The Mars family is part of a group that's spent millions since 2012 lobbying for estate and gift-tax reform, according to Senate disclosures.

The impact of higher inheritance taxes could significantly reshape many of these fortunes. Take the Lees of Samsung. The South Korean clan dropped off this year's ranking after paying an $11 billion inheritance tax following last year's death of patriarch Lee Kun-hee.

The Lees however are an exception. While South Korea has among the highest inheritance taxes in the world, there's a multiplicity of ways wealthy families can sidestep levies. In France, inheritances are taxed up to 45% and still the country boasts four families ranked among the world's richest, more than any nation besides the US.

The question mark over future tax policy has been a chief challenge for wealthy families this year, at least in the US, according to Karen Harding, head of the private wealth group at Boston-based NEPC.

These families "can plan for anything, they just need to know what it is."