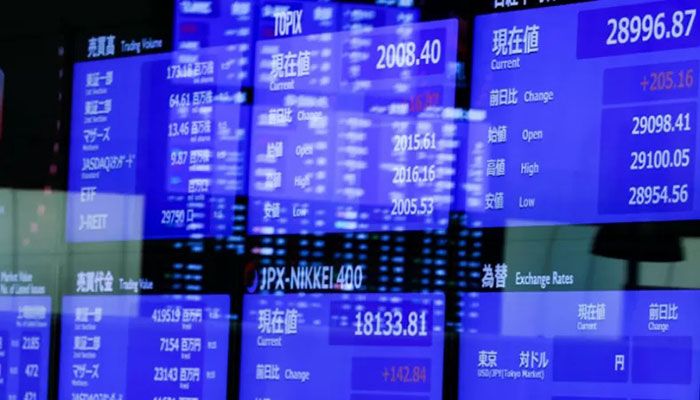 After starting November with a rally thanks to easing inflation concerns and signs China was edging towards a looser approach to the disease, the optimism has been given a massive jolt since the country announced its first virus deaths in six months.

They come as infections rise across the country, with residents in Beijing worried that leaders will introduce lockdown measures similar to those seen earlier in the year in Shanghai, which lasted for months.

The flare-ups come just a week after China said it would begin rolling back some of the strict Covid rules that have been in place since the pandemic started in 2020, even as the rest of the world has moved on.

Analysts said the latest developments highlight the long road ahead for China in emerging from the crisis as President Xi Jinping sticks solidly to a zero-Covid strategy that is widely blamed for the country's economic troubles.

"Some investors are convinced that China's reopening is a formality and will be catalysed by the (World Health Organization) downgrading Covid to an endemic.

"We know that China's reopening will be laced with fits and starts as the two-step-forward-one-step-back routine becomes the norm."

Hong Kong, which thundered more than 10 per cent higher in a three-day surge earlier this month, fell for a fifth straight day, while Shanghai was also lower along with Seoul, Taipei and Wellington.

Still, there were gains in Tokyo, Sydney, Singapore, Manila and Jakarta.

That came after a drop on Wall Street, where trading is lighter than usual owing to the Thanksgiving break at the end of the week.

Wednesday sees the release of minutes from the Federal Reserve's most recent policy meeting, which will be pored over for insight into officials' thinking against the backdrop of four-decade-high inflation and signs of a slowing economy.

Hopes that the bank will begin to take its foot off the pedal were boosted earlier this month by figures showing inflation slowed more than expected, suggesting a series of hikes were beginning to bite.

Still, several members of the Fed's top brass have warned against getting carried away and said more increases were needed to get on top of prices.

But JPMorgan Chase & Co's Marko Kolanovic said markets would likely stumble into the new year and only pick up once the US central bank takes a more dovish stance on borrowing costs. JPMorgan saw risk assets to trade "rangebound with a more pronounced downside risk".