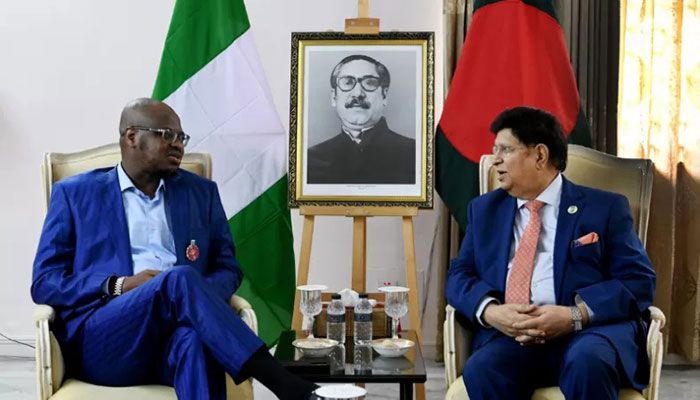 Bangladesh and Nigeria agreed to explore possibilities of contract farming in the African country by Bangladeshi farmers as well as collaboration in agro and food processing, the Foreign Ministry said Saturday.

Nigeria also proposed that both countries collaborate in freelancing areas and digital services such as national Identification documents, reports UNB.

At the invitation of Foreign Minister AK Abdul Momen, a 17-member government and private sector delegation of Nigeria is in Dhaka now.

The Nigerian delegation will have several meetings with government sectors like the ICT Division, Bangladesh Telecommunication Regulatory Commission, the Secondary and Higher Education Division, the Ministry of Textiles and Jute, the Bangladesh Investment Development Authority, and the Bangladesh Economic Zones Authority.

It will also have meetings with private sector representatives like Beximco, Bangladesh Garment Manufacturers and Exporters Association and the Federation of Bangladesh Chambers of Commerce and Industry.

The delegation visited Bangabandhu Sheikh Mujibur Rahman Memorial Museum in the evening and paid tribute to the Father of the Nation.

The delegation met with Momen at State Guest House Padma.

During the meeting, the foreign minister cited the remarkable achievement of Bangladesh during the last decade in the socio-economic sectors, including women's empowerment.

Momen briefed the Nigerian delegation about Bangladesh's performance in the digital sector especially, in the rapidly growing IT sectors and opportunities in the Bangladeshi hi-tech parks.

At the meeting, Momen pointed out that the D-8 countries should accelerate efforts to increase mutual trade. He sought continued support from Nigeria on the Rohingya issue.

Framework agreement on FTA or PTA

The sides also agreed to consider signing an agreement between the apex chambers of the two countries and establishing cooperation in the IT and ICT sectors.

The Nigerian delegation Pantami had a bilateral meeting with Commerce Minister Tipu Munshi.

The commerce minister said mutual trade between Bangladesh and Nigeria is steadily growing and the Bangladesh government is making efforts to augment trade and commerce with Nigeria.

Tipu said there is a huge potential for cooperation in economic areas like manufacturing and garments industries.

He underlined the importance of more contacts among the chambers and businesses of the two countries and suggested the formation of a joint business council.

Pantami talked about Bangladesh's excellence in the IT and garments sectors. Tipu sought continued support from the Nigerian government on the Rohingya issue as well as at different UN elections where Bangladesh has launched candidature.

He also urged the Nigerian government to set up a diplomatic mission in Dhaka.