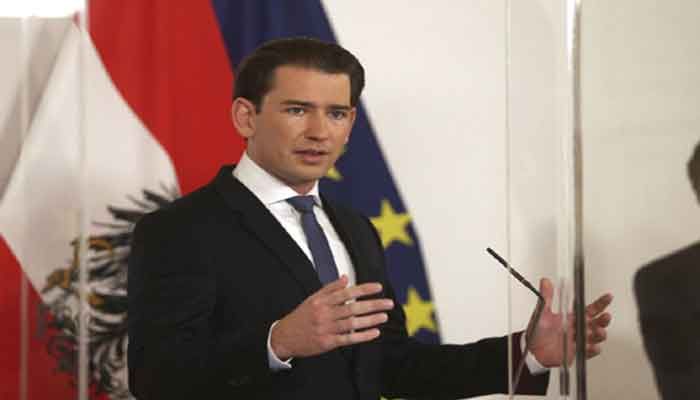 “From Tuesday and until December 6 a new lockdown like the one from spring will brought in,” Chancellor Sebastian Kurz told a news conference, reports AFP.

Kurz's administration enforced a partial lockdown two weeks ago, but this did not stop cases from rising and reaching a daily record on Friday.

Strengthened steps will limit social interaction to a minimum and people who are advised to remain indoors will save for specifically defined purposes such as shopping, jobs where working from home is not possible, medical visits and sport.

“My pressing demand for the coming weeks is as follows: Don’t meet anyone. Every social contact is one too many,” said Kurz, stressing the need for “radical” action.

“There are still many who say that infections don’t happen at school, in shops or services. But the truth is the authorities can no longer trace 77 percent of new infections, which means they no longer know where contamination is happening.”

Only shops selling essential products would be able to remain open, such as grocery stores, chemists, banks and post offices.

Primary and middle schools will move to distance learning, as senior schools and colleges have already done.

Vienna enforced a partial lockout, including a nighttime curfew from 8 p.m. at the beginning of November, and ordered the closing down of restaurants, libraries, music halls and sports venues, but virus cases continued to increase.

Over the past seven days, the country has seen 831 reported cases per million inhabitants, according to the "Our World in Numbers" website, as Austria jumped ahead of the Czech Republic and Switzerland's neighbors to the top of the world charts.

The nation of 8.8 million escaped relatively lightly during the first outbreak, but on Friday there were 10,000 infections in 24 hours and another 7,000 on Saturday.

By comparison, there were only around 1,000 cases per day at the beginning of October.

The recent increase has put pressure on hospitals with Covid-19 patients currently occupying 567 out of 2,000 intensive care beds.

The country’s pandemic death toll currently stands at around 1,700.