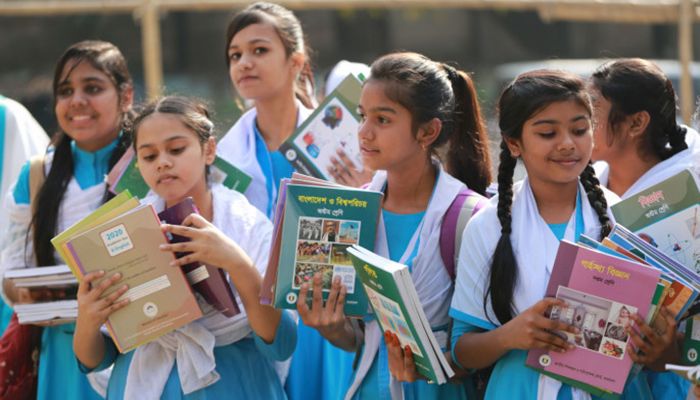 Due to the coronavirus situation, there is no book festival on New Year's Day. However, the distribution of new books is starting from today, Saturday (January 1), reports BSS.

In this academic year,  340 million 70 lakh 22 thousand 130 copies of textbooks are being distributed free of cost among 40 million 17 lakh 26 thousand 856 students. These include Braille textbooks for visually impaired students and textbooks printed in the mother tongue for students of five ethnic groups.

However, it is not possible to give books to all students on the first day of this year. Students will get new books in phases.

Prime Minister Sheikh Hasina inaugurated the 'Textbook Festival' after the results of SSC and equivalent examinations were released by joining the video conference from Ganobhaban at a function held at the International Conference Center in the capital on Thursday.

Education Minister at the time. Dipu Moni says that 95 percent of the books for the new year have been made. In the meantime, they are being delivered to various educational institutions. The remaining 5 percent of books will be delivered to schools in the first week of January.

Since 2012, the present government has been officially handing over books to the students through book distribution festival. As a continuation of this program, book distribution is being celebrated in a festive and joyous atmosphere on the first day of the year in the presence of teachers-students-parents, local people's representatives, officials and employees of the primary education department.

Although the book festival was organized in 2021 to mark the birth centenary of Father of the Nation Bangabandhu Sheikh Mujibur Rahman, it was not possible due to the global corona situation. However, the Ministry of Primary and Mass Education, through the teachers and officials of the primary schools, successfully delivered 9 crore 37 lakh 75 thousand 893 books to the homes of the teachers on January 1.

In addition, arrangements have been made for the preparation and supply of pre-primary class reading materials and primary level textbooks in the mother tongue with its own alphabet for the children of small ethnic groups. In the 2022 academic year, textbooks are being distributed among the children of five small ethnic groups (Chakma, Marma, Tripura, Garo and Sadri) at pre-primary and primary level.