Torch Procession Held at RU in Solidarity with Students of SUST 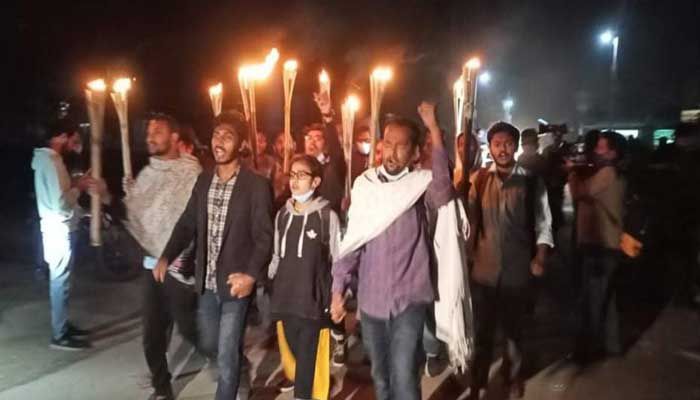 ﻿Leaders and activists of left leaning political organisations of Rajshahi University (RU) have staged a torch procession protesting the attack on the students at Shahjalal University of Science and Technology (SUST).

The procession started from 'Amtala' behind the central library of the university on Monday at 7.30 pm. Later, at the end of a tour of the campus, a demonstration was held at the 'Zoha Chattar' of the university, reports UNB.

Leaders and activists expressed their full support to all the demands of SUST students including resignation of the Vice-Chancellor Fariduddin Ahmed.

Addressing the demonstration, Md. Shakil, joint convenor of 'Biplobi Chhatra Maitri' of the university said the students of SUST were attacked by police without hearing their logical demands.

"Many student were seriously injured. I strongly condemn such a heinous attack. I also fully support their demands," Shakil said.

Shakila Khatun, president of Chhatra Union's RU branc, said: "The university is a place for free thought. But in SUST, the students who were agitating for logical demands have been attacked. This is not an isolated incident, This is the same picture across the country. A movement starts with a logical demand, and then the police force and student wing of the ruling party attacks them."

Besides, Ridom Shahriar, convenor of Samajtantrik Chhatra Front's RU unit, and Fuad Ratul, the organising secretary of the same organisations, also addressed the protest rally. Among them, many leaders and activists of the Left Alliance were present in the program.

Earlier on that day, students from different departments formed a human chain in front 'Shaheed Buddhijibi Smritifalak' of the university protesting the same issue.