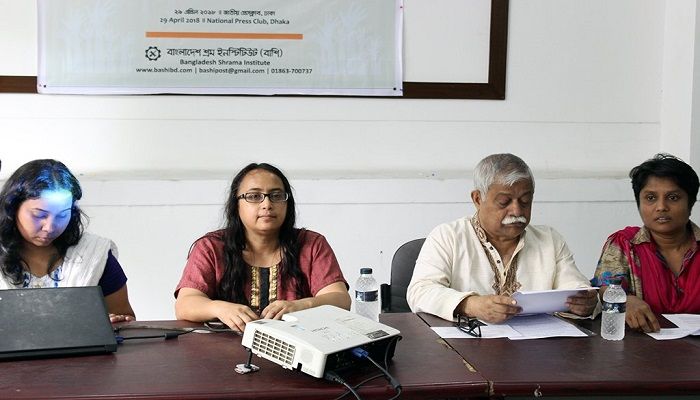 ﻿Labour rights activists urged trade unions and labour organizations to take necessary initiatives to develop women leadership in female intensive industries such as the garment sector, in a press conference held in the National Press Club on Sunday.

The press conference was organized by Bangladesh Labour Institute (Bashi) to disseminate findings of the first part of a research titled "Trade unions and the major barriers women face while working in labour organizations."
The first part of the research analyzed the current state of female participation and women leadership in the export-oriented readymade garment sector.
In the conference, speakers talked about the country's social system where women have to maintain double roles, both as a homemaker and as a working woman, which takes up a lot of their energy. They emphasized the help families could provide in aiding women in their daily chores to ease up their load.
The speakers also urged labour organizations to engage in strong social movements, which could develop female leadership in their organizations.
Bashi member Farhana Afrin Tithi, who presented the keynote paper, identified six major barriers women in trade unions and labour organizations face while stepping up the ladder to become a leader.
The barriers mostly consist of huge workloads at home and outside, male dominance in leadership roles despite prominent female presence at the forefront of labour rights movements, creation of artificial conflicts of interest among women workers in labour organizations, lack of mutual trust among labours, among others.
"Women constitute a majority of the Bangladesh labour sector," said Shah Atiul Islam, president of Bashi Trustee board. "Their participation in and contribution to labour movements are by no means minimal. Yet, their presence as leaders or policymakers is negligible. This reveals the partial failure of labour movements."
Leader of Garment Workers Trade Union Centre Joly Talukder emphasized the need for further research to improve the current situation, where women have a nominal role in decision making, yet play important roles in movements.
According to the speakers, currently, there are 32 national trade union centres, 169 sectoral trade union federations, and 7,289 basic unions in Bangladesh consisting of about 2,300,000 members. 500 of the organizations are export-oriented readymade garment industries. However, women represent only 15% of the total members.
They recommended changing social attitudes, tackling sexual harassment in organizations, identifying strategies to develop women leadership, and other factors to improve the ongoing situation.