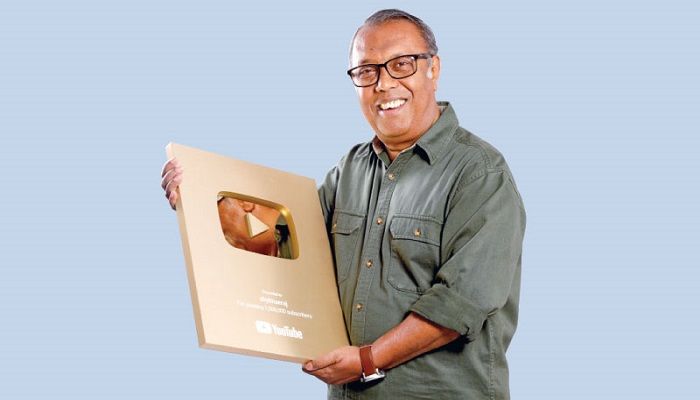 ﻿Shykh Seraj, noted development journalist, director and head of news of Channel i, has been awarded the Gold Creator Award from YouTube for his channel, Shykh Seraj (youtube.com/shykhseraj) recently.

Usually, the Gold Creator Award is given to the YouTube channels that surpass 1 million subscribers. Shykh Seraj’s channel got the award on the same ground which has already reached more than 1.04 million subscribers. Commenced its journey in 2011, the channel gained immense popularity for uploading various types of video contents mainly on farming.

DhakaLive has news that the YouTube channel of Shykh Seraj crossed 1 million on October 9 this year, while the award reached Shykh Seraj’s hand on October 31.

Shykh Seraj said about achieving the award, “It’s a great news. Thanks to all my subscribers. The conventional media is now being transformed to the digital media. In the coming days, I have a plan to work on the over-the-top (OTT) media services with my contents.”

‘Hridoye Mati O Manush’ is already a very popular on Channel i, while the YouTube channel of Shykh Seraj has taken the show to the masses at home and abroad. The people across the globe have been attracted to this channel by watching several popular programmes, such as ‘Hridoye Mati O Manush’, ‘Chhad Krishi’, ‘Krishoker Eid Ananda’, ‘Krishi Budget Krishoker Budget’ as well as news reports on farming and also features from rural Bangladesh and across the world.